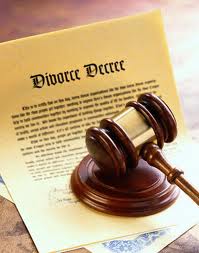 Many lawyers have given reasons such as poverty and the inability of couples to determine if they really are mean’t for one another as responsible for the growing rate of divorce.

The Courts are usually adamant to grant a petition for divorce or dissolution of marriage and Judges usually ensure that parties exhaust all forms of reconciliation and dialogue in a bid to save the marriage especially if there are children involved,if however the court believes that the marriage has broken down irretrievably,it will go ahead to dissolve the marriage.
It is a general rule as provided in section 30 of the Matrimonial Causes Act that divorce proceedings cannot be executed within 2 years of marriage except by leave of court. By virtue of the Matrimonial Causes Act, a marraige may be  considered not valid in certain circumstances which include:
1.  when either parties at the time of the marraige are lawfully married to some other person.
2.  If the parties are within the prohibited degrees of consanguinity.
3. When there is failure to comply with the requirements of the law with respect to solemnisation of marriages.
4. Also a marraige would be void if at the time of the marriage either party of the marriage is incapable of consumating the marriage.
5.  Either party is of unsound mind, mentally defective or subject to recurrent attacks of insanity or epilepsy.
6. Either party is suffering from a venereal disease in a communicable form, or
7. The wife is pregnant for some one else other than the husband.
DISSOLUTION OF MARRIAGE
A party to a marriage may present a petition for dissolution of marriage to the court on the ground that the marriage has broken down irretrievably. The court on the other hand shall hold that the marriage has broken down only if the petitioner can prove one or more of the following facts:
A) that the other party has wilfully and persistently refused to consumate the marriage (I.e refused to have sex).
B) that the other party since the beginning of the marriage has committed adultery and the petitioner finds it intolerable to live with.
C) that the other party has behaved in such a way that the petitioner cannot be expected to live with them.
D) that the other party deserted the petitioner for a continous period of at least one year.
E) that both parties have lived apart for a period exceeding 2 (two) years.
F) that the other party has been absent for such a period of time that it will be safe to assume that they are dead.
G) if since the marriage, the other party has committed rape, sodomy or bestiality.
H) if since the marriage the other party has been an habitual drunkard or habitually been intoxicated by reason of taking or using to excess any sedative, narcotic or stimulating drug.
I) If since the marriage, the other party has been in prison for a period of not less than 2 (three) years after conviction for an offence punishable by death or imprisonment for life.
The above conditions are not exhaustive and it is advised that one retains the services of a competent lawyer if one needs more legal advice on the subject of divorce.
I actually will love to use this opportunity to ask young Nigerians to get married for the right reasons and ignore the allure of the other party’s wealth or even peer and societal pressure because i fear that dicorce proceedings in Nigeria will soon explode exponentially.
Adedunmade Onibokun Esq.