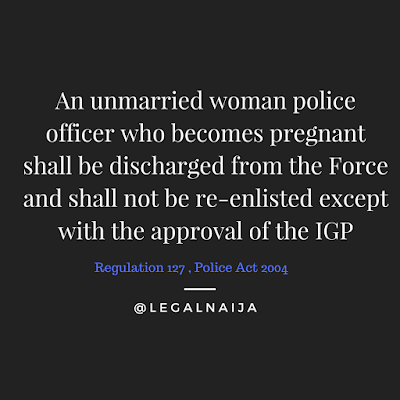 Gender discrimination is
prejudice or discrimination based on a person’s gender in circumstances where
the gender difference is irrelevant to a person’s rights, abilities or
performance. Though it may affect any gender, women and girls are the most
commonly affected. The right to freedom from discrimination on the basis of
gender, race, ethnicity, etc, is protected by Section 42 of the Nigerian
Constitution as well as by many international instruments, which Nigeria has
ratified and enacted into law.
However, some of the laws
enacted in Nigeria, contain provisions which to encourage and perpetuate
discrimination against the female gender. The discriminatory provisions in the
Police Act and Regulations Cap P19, L.F.N, 2004 (the Act), shall be the focus
of this discourse.
The discriminatory
provisions are mainly contained in Regulations 118 – 126 of the said Act. Those
Regulations deal primarily, with the enlistment and duties of female police officers.

1.     Qualification
for Enlistment:
Regulation 118 of the Act,
provides for the criteria to be met by a female, seeking enlistment into the
Nigerian Police Force (hereafter referred to as NPF). By paragraph (g) thereof,
such a woman must be UNMARRIED.

2. Duties of Female
Officers:
By Regulation 121 of the
Act, the following shall be the duties of female members of the NPF;
(a) investigation
of sexual offences against women and children;
(b) recording of
statements from female witnesses and female accused persons and from children;
(c) attendance
when women or children are being interviewed by male police officers;
(d) the searching,
escorting and guarding of women prisoners in police stations, and the escorting
of women prisoners to or from police stations;
(e) school crossing
duties;
(f) crowd control,
where women and children are present in any numbers.
An extension of the above is
found in Regulation 122 of the Act, which provides;
“Women police officers
recruited to the General Duties Branch of the Force may, in order to RELIEVE
MALE POLICE OFFICERS from these duties, be employed in any of the following
office duties, namely-
(a) clerical
duties;
(b) telephone duties;
(c) office orderly
duties.”
These duties are far too
mundane for any police officer and seem to suggest that the female police
officer is incapable of carrying out the more technical aspects of police work.

3.     Permission
to Marry:
It is interesting to note
that by Regulation 124 of the Act, a female police officer needs to apply in
writing, for PERMISSION to marry, from the Commissioner of Police, of the state
police command, where she is serving. The written application must state the
name, address, and occupation of the person she intends to marry.
That section further
provides that permission will be granted for the marriage if the intended
husband is of good character and the WOMAN POLICE OFFICER HAS SERVED IN THE
FORCE, FOR A PERIOD OF NOT LESS THAN THREE YEARS.
The latter part of that
section implies that a female police officer in Nigeria, will not be allowed to
marry, any time less than 3 years after joining the NPF. This is besides the
rather appalling fact that she must apply for and obtain permission before she
can be allowed to marry.

4. Pregnancy of unmarried
women police:
By Regulation 127 of the
Act, an unmarried woman police officer who becomes pregnant shall be discharged
from the Force and shall not be re-enlisted except with the approval of the
Inspector-General of the NPF.
It is interesting that these
are only applicable to women, in the Nigeria Police Force. A comparison of
these provisions with those contained in Section 72 (2) of the Act (the
subsection dealing with the enlistment of male police officers, into the NPF),
will show no such restrictions exists with respect to male police officers.
What if a male police officer impregnates a girl, out of wedlock? What is the point
of placing such ridiculous conditions on women? Why are the male and female
officer subject to different rules?
While many will agree that
these provisions are discriminatory, subsection 3 to Section 42 of the Nigerian
Constitution, which arguably permits discrimination on this ground. Section 42
(3) of the Constitution is now reproduced for clarity:
“Nothing in subsection (1)
of this section shall invalidate any law by reason only that the law imposes
restrictions with respect to the APPOINTMENT of any person to any office under
the State or as a member of the armed forces of the Federation or member of the
Nigeria Police Forces or to an office in the service of a body, corporate
established directly by any law in force in Nigeria.”
It suffices to say, that the
provisions of Section 42(3) of the Constitution, deals with the appointment,
while the aforementioned discriminatory provisions of the Act, extends to
serving female police officers.
The above provisions of the
Police Regulations sharply contrast the provisions of Articles 2, 3 and 18(3)
of the African Charter on Human and People’s Rights (ratified and enacted by
Nigeria, in accordance with Section 12 of the Constitution and subsequently
referred to, as the African Charter), where the right to freedom from
discrimination is guaranteed. After a combined reading of those Articles,
it is my opinion that the provisions of Section 42(3) of the Constitution
have now been overridden. The provisions of the said Articles are reproduced
hereunder;
“Article 2.
Every individual shall be
entitled to the enjoyment of the rights and freedoms recognized and guaranteed
in the present Charter without distinction of any kind such as race, ethnic
group, colour, sex, language, religion, political or any other opinion,
national and social origin, fortune, birth or other status.
Article 3.
l. Every individual
shall be equal before the law.
2. Every individual shall be
entitled to equal protection of the law.
Article 18(3).
The State shall ensure the
elimination of every discrimination against women and also ensure the
protection of the rights of the woman and the child as stipulated in
international declarations and conventions. “
It is interesting to note
that these offending provisions in the Police Regulations which were enacted in
1968, at a time when the societal attitude to women in the workplace was very
different from what it is today, still remain on our statute books. This is
more so as there is no rational justification for the imposition of these
discriminatory provisions, since they do not in any manner promote the
efficiency or discipline of the female police officer and today, women occupy
very senior roles in the Police and have shown themselves to be just as competent
and as disciplined as their male counterparts. An example is the rise of Farida
Waziri, through various notable ranks in the NFP, up till Assistant Inspector
General of the NFP.  The move to expunge these regulations is thus, long
overdue.
Relying on the provisions of
the African Charter, and the principles of equity, good conscience, a move can
be made for the discriminatory provisions of the Police Act and Regulations, to
be expunged. It is my hope that the needful is done, in the nearest future. 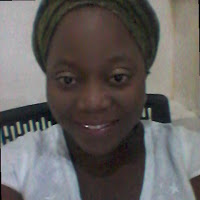