Gas Flaring In Nigeria: Risks And Recommendations | B. Adeniran 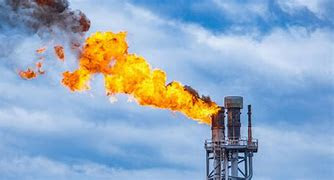 When oil was
discovered in the 1950s, the country was full of gaiety thinking the ‘god of
wealth’ had finally visited Nigeria. The discovery of oil is however also one
of the worst things to have happened as the Niger Delta region is afflicted by
environmental degradation induced by oil spillage and gas flaring. Flares from
Niger Delta account for a major percentage of global flares. It is reported
that over 386 million cubic feet of natural gas is flared every day in Nigeria.
How the environment is managed has a direct bearing on the quality of life of
every living being. Thus, the poor management and pollution of our environment
is bound to cause irremediable damage to human existence and could make the
earth inhabitable for man, if urgent care is not taken.

Gas flaring releases
greenhouse gases and toxic pollutants into the atmosphere which have
environmental and psychological impacts on plant species, wildlife, marine life
and human life.
Gas flares emit methane, sulfur dioxide, and other volatile organic compounds
which are known to exacerbate respiratory problems. As a result,
residents of oil producing communities in Nigeria live in tortuous conditions
arising from acute environmental degradations, air and water pollutions, caused
by the production activities of oil and gas companies in the area. Many of these
communities have no potable water and rely on these polluted stream water or
possibly acidic rain water.

One of the major
reasons for the non-development of natural gas is the lack of a ready local
market and the high cost of access to international markets. Although gas is a
cheap energy source, especially associated gas (which incurs no added cost of
exploration), its development has been limited owing to the fact that its cost
of transportation is higher and more difficult than that of petroleum. Gas was
not a popular energy source at the time exploration facilities currently used
in Nigeria were built, hence the oversight of gas gathering. Consequently,
about 75% of produced gas is flared because it simply is not as lucrative as
petroleum.
Some secondary reasons include incompetent leadership and corruption.

The United Nations
has taken steps towards achieving a greener environment for all. One major
outcome of the 2012 United Nations Conference on Sustainable Development was
the development of a set of Sustainable Development Goals. These goals, many of
which are associated with the pursuit of a greener environment, have raised
discussions across the globe and countries have, in response, made policies and
laws in line with these goals. Additionally, the objective of the Earth Charter
is to bring forth a sustainable global society founded on respect for nature,
universal human rights, economic justice, and a culture of peace . Some policies and
regulations made in Nigeria in respect of environmental preservation include; The
Gas Flaring (Prohibition and Punishment) Bill of 2017, the West African
Gas Pipeline Project (Special Provision) Act of 2005, among others.
However, these laws are rather weak and sketchy.

The government must
first invest in the gas market/industry, making available the necessary
transport and storage infrastructure for gas production. Although expensive, it
will pay the government in the long run. Seeing as gas is a cleaner energy
alternative to petroleum. The gas industry will not only create a means of
revenue for the government, it will also create a greener environment.

The supply and demand
for natural gas are at present, imbalanced. To reduce waste of Natural gas or
gas flaring, the demand for gas must first increase. Although natural gas is
mostly seen as a cooking or heating fuel, it has many other energy and raw
material uses. Natural gas is used as a heat source in making glass, steel,
cement, bricks, ceramics, tile, paper, food products and many other
commodities. Natural gas is also used at many industrial facilities for
incineration. Gas powered vehicles can replace petroleum powered vehicles as
they emit less smog-producing pollutants and greenhouse gas emissions. Same
goes for house-hold generators. This proposition will however not sell unless
petroleum is jettisoned.

The world’s largest
natural gas consumers are, the United States of America, Russia, Iran, Germany,
China, etc. Germany, for example, imports more than half of its Natural gas.
Nigeria can take advantage of this fact, making profitable deals with these
countries instead of burning off natural gas.

Addressing the issue
of gas flaring in Nigeria may appear difficult seeing that Gas flaring which has
been illegal in Nigeria since the 20th century is still a matter of
grave concern till date. The Flare Gas (Prevention of Waste and Pollution)
Regulations of 2018 proposed a penalty of $2 per thousand standard cubic
feet metre of gas for oil anyone producing 10,000 barrels of oil per day or
more and $0.5 for anyone producing less than 10,000 barrels of oil per day.
Strict enforcement of the 2018 regulation by the Federal government will deter
companies from flaring gas.

The bad news is that
the world we know and love is falling apart, the good news is that there is
still time to fix it. Whether we will be here tomorrow is dependent on our
actions today. A wise man once said, “look after the land, and the land will
look after you. Destroy the land, and it will destroy you”. We either go
green, or go home.

1. Eyes on Nigeria: Gas Flaring. American Association
for the Advencement of Science.