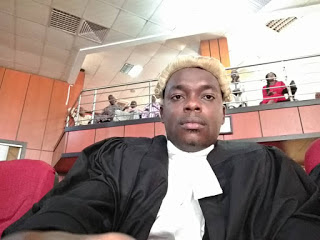 To every layman, rumour and suspicion endures as one; when missed with ignorance it savors every part of the heart and soul with fantasies: Richarmond O. Natha-Alade
When you are not a layman to the subjects of law and you are not ignorant, you may have to battle with your emotions and the common noise in respect of the realities and technicalities involved in governance, government and law.
Under Nigerian Laws, Sheik El-zakzakky may never be released, and his none release would always find root and justification under the law. Yes! You ‘read’ me right.
Agitations may endure as to his release, but the powers that be is ultimate in the circumstance and situation as that of El-zakzakky.
Be careful of any offence you may have to commit; some of those offences have multiplier effects
El-Zakzakky, by one of his charges, though granted bail by the Federal High Court years ago cannot be released under the law once an appeal is lodged at the court of appeal and a stay of execution pending appeal is filed along with such appeal. The appeal of the ruling granting bail to El-zazakky would likely be premised on the none judicious and/or judicial use of the discretionary power of the lower court to have admitted the accused to bail despite the serious nature of his offence and his constitution of threat to national peace and security; such appeal and/or stay of execution is arguable and same would ordinarily have merit once raised along other serious issues of national security and concerns.
One of such appeal, was recently decided by the Court of Appeal in one of the charges El-zakzakky faces; of which the Court of Appeal ordered El-zakzakky to be released on bail (probably due to his deteriorating health issues), yet, despite the court of appeal order as to his admittance to bail, be rest assured that another appeal and stay of execution of the appeal court order would be lodged at the Supreme Court. So therefore, since there are several appeals on a single charge, do you then expect El-zakzakky to come out of prison so soon from now despite facing multiple charges? Your guess is as good as mine.
Also, it is necessary to state that El-Zakzakky faces multiple charges before different courts on different offences. And once an individual faces different multiple charges in different courts, the courts where such charges are filed would hear application for bail separately and distinctively based on the offences brought before them as if it knows nothing of other pending cases, this notwithstanding the fact that such person (may) have been granted bail in one court or the other before his current arraignment.
Recently, in one of El-zakzakky charges freshly filed before a Kaduna Court, El-zakzakky bail application was refused by the Kaduna lower court; I do not know on what ground, but for El-Zakzakky to be released on bail in respect of the fresh charge, he would have to appeal such order refusing him bail all the way to Supreme Court, if need be.
As it is today under our laws, which are numerous and fragmentally duplicated by scopes, relationship and definition of offences, it is possible for El-Zakzakky to be arraigned in more than 10 courts for different offences and each of those court would have to decide on his bail application in one way or the order. Such decision is also not final until all gets to Supreme Court, unless the prosecution backs down or chooses to obey any granted bail application without appeal.
Can you then blame President Buhari or our law makers for the loopholes in our laws? Relevant sub-sections under section 36 of the Constitution of Nigeria relating to prohibition double jeopardy would only operate in respect of same offence, not different offences brought under same facts and/or different laws?
In the light of the above, do you then expect El-Zakzakky to be out so soon?
Government is powerful, particularly the Executive arm, and since tit is the duty of the executive arm of government to arraign any person charged with any offence, they have the power to charge all offences together in a court, if such court has jurisdiction in respect of all the offences, or they exercise their choice by separating those offences and filing them in different courts that has jurisdiction on either or both the (legal) territorial facts and/or Subject-matter of facts.
Since no law expressly bars the law enforcers or prevail on them to file all the alleged crimes in one court at the same time or at a particular time, and since any crime committed cannot be statute-barred, pray you are never at their mercy as El-zakzaky.
I tell you, under our laws, it is possible to file ten or more charges of different offences with same and/or similar facts in ten different courts at different times. Charges may even be withdrawn and refilled with amendments. In such situation, if the matter had not been heard in merit, such person’s bail would still have to be re-negotiated by application to court.
Nnamdi Kanu may today be thanking his stars on his forced disappearance, yet, he may have to die exile except he chose to come back to prison till all facts and defaults in laws hanging on his neck is determined. In determining if multiple charges on him would be placed before the court so quick or forever, the Federal Government of Nigeria has hands holding the piper to dictate the tone of his life, except the unusual happens.
Stay out of crime; especially the crimes that threatens national security or collective interest and well-being of Nigerians
Richarmond O. Natha-Alade is a legal Practitioner and Principal Partner at
Sun Natha-Alade & Partners (SNATHAP)
lordricharmond@gmail.com
www.snathap.com