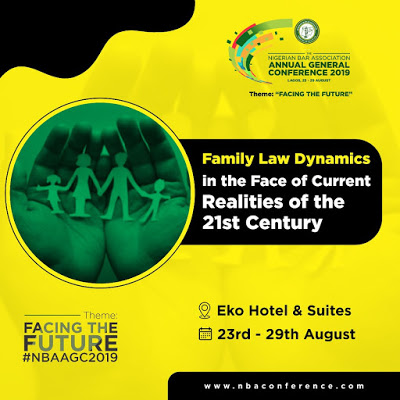 Family
law gives birth to several key issues like divorce, nullity, adoption, custody
of children, cohabitation, spousal rights and so on. Family law in Nigeria is
regulated by several laws which are the Matrimonial Causes Act 1970, now Cap.
M7 LFN 2004, which regulates marriages, breakdown of marriages and the welfare
of children, The Child Rights Act 2003 which has been adopted by several states
and it covers matters related to adoption and welfare of children.
In 2012,
Lagos State enacted the family law rules pursuant to the Child’s Right Law of
Lagos State. The rules simplified procedures on custody, guardianship and
welfare of children. Others include the Maintenance Orders Act 2004, The
Married Women’s Property Act 1882, the Law against Domestic Violence in Lagos
State, Same Sex Marriage (Prohibition) Act 2013.
Family
law is not fully developed in Nigeria in contrast with other jurisdictions as
there are several lapses in our laws pertaining to emerging issues like
surrogacy and pre-nuptial agreement.
Under
the Nigerian Law, the only ground for dissolution of marriage is that the
marriage must have broken down irretrievably. There are several factors under
this provided in Sections 15 and 16 of the MCA. These provisions are fault
based, that is, fault must be alleged and proved by the party seeking
dissolution of marriage. For example, adultery, persistent refusals to
consummate marriage and so on. However, there are situations where the
petitioner need not allege fault. For example, where the parties have lived
apart for a continuous period of two to three years.
In
Nigeria, in some cases, the courts have refused to dissolve parties’ marriage.
This act is alien to the western world where divorce is a norm. This was seen
in the case of Ubi Franklin and Lilian Esoro where the court held that their
reason for divorce was invalid. Should Nigerian Courts refuse parties
willingness to dissolve their marriage?
On
the issue of adoption, the procedure is cumbersome as the adoption process
takes time to complete. The procedures and documents to be submitted is stipulated
in the Child‘s Right Act 2003. Adoption in Nigeria is not so common in contrast
with other jurisdictions and as a result, the process is highly regulated and
less cumbersome. Why should families be required to go through cumbersome
processes to adopt a child?
Another
controversial issue on family law is on spousal rape. Is it possible for a
husband to rape his wife and vice versa? Are there any laws in place regulating
this?
The various questions, issues
and challenges of family law and the way forward would be discussed at the
Plenary Session of the NBA Annual General Conference scheduled to hold on;
Date:
Tuesday, 27th August 2019
Time:  9.00 – 10.30
Venue:
Iris, Eko Hotel
Speakers:
Moderator: Hon. Justice
Elsie Thompson
Panelists:
Kikelomo Ayeye
Abdulraman Mohammed
Chioma Onyenucheya – Uko
Taiwo Akinlami