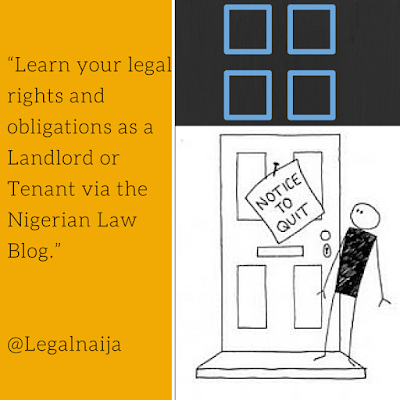 A client once complained
to me about a belligerent tenant who despite owing arrears of rent had refused
to vacate the premises. My Client wanted to let the premises to someone else
who was ready to pay and asked how he could get the tenant out in two months.
This is rather an
unfortunate situation landlords sometimes find themselves in. My Client
required funds for his business and these funds were being held over by the unyielding
tenant, which was very frustrating for him. One cannot blame tenants who also
are in this position because such disputes usually arise from the financial
incapacity of the tenant or from dispute with the landlord over rights and
obligations of the parties.
Sadly for my client, I informed
him that his tenant being a yearly tenant could not be evicted in 3 months except
he left on his own accord as it was mandatory that the tenant be served a 6 months’
Notice before the process of eviction could begin.
My client also wanted to
know when exactly he could serve the Quit Notice as the tenants term was to
expire in seven months. According to the law in this regard, a Notice to Quit
must end not sooner than at midnight on the day preceding the anniversary of
the tenancy as stated by the Supreme Court in Nig. Joint Agency LtdV. Arrow Eva
& Gen. Trans. Co. Ltd (1970) NSCC 273. Therefore, if the yearly
tenancy term began on the 5th of February, 2015, the Notice to Quit
must expire no sooner than 4th of February, 2016.
Many impatient landlords
sometimes result to self-help in these situations. Some by executing physical
ejection of the tenant by forcefully removing the tenant’s belongings from the
premises or by frustrating the tenant via cutting off water supply to the
tenant’s apartment and also via some extreme measures like removing the roof of
the building and exposing the tenant to the elements of nature.
All landlords must note
that these sorts of actions are extremely frowned upon by the law. This is
further illustrated by the Supreme Court’s pronouncement in Prof.
Ajibajo Akinkugbe V. Ewulum Holdings Nigeria Limited & Anor (2008) 4 SCNJ
404.
Even where a tenancy has
come to an end, the landlord is not entitled to go out into the premises and
physically throw out the tenant but must give the statutory notice required to
the person in possession. The laws of all civilized nations have always frowned
at self –help. The law forbids it. Elochin (Nig) Ltd V. Mbadiwe (1986) 1 NSCC
42.
Where the landlord brushes
aside the necessity to obtain an order of court of law for possession and
jettisons the rule of law, enters the premises and takes possession, he has
invaded and committed an infraction of the rights of the tenant and renders
himself liable in trespass.
It is therefore advised
that should a landlord be in such situation, it is wise to retain the services
of a lawyer in ejecting the tenant. Also negotiating and mediating as a means
of settling tenancy disputes should be explored and encouraged.
Dunmade Onibokun Esq.
Principal Partner
Adedunmade Onibokun &
Co.
info@adedunmadeonibokun.com
dunmadeo@yahoo.com
www.adedunmadeonibokun.com
+2349095635314
Dunmade’s legal practice
focuses on corporate and commercial law, regulatory compliance, due diligence,
corporate advice and commercial transactions.
He is the Principal partner of Adedunmade Onibokun & Co. a law firm
based in Lagos, Nigeria. Dunmade is also a blogger and publishes the Legalnaija
Blawg via www.legalnaija.com