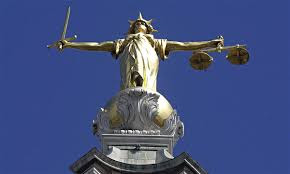 I watched an episode of a
legal series on TV called “the good wife”. On this particular episode, an
accused person is charged with the offence of murder and was looking at a life
imprisonment sentence. He had the option of taking a plea deal of 8 years but
refused because he affirmed he was innocent and was willing to take his chances
with the jury. While the matter was ongoing in court, counsel on the
prosecution and defense side were conferring with the judge on whether a
witness should be allowed to testify in the matter. In the usual rapport of
lawyers and judges, they argued and eventually turned this into a joke and were
seen laughing heartily while the accused person looked on, confused as to what
could be really funny while his life hangs in the balance.

He looked at the
jury and members of the gallery with tears in his eyes, no one looked at him
more than a criminal charged for killing a person. I guess it was at this point
he decided there was no way the case was going to go his way. He looked around
and saw the gun of the officer in court exposed. He managed to get it and ended
up shooting a number of people in the court room, his lawyer and tried killing
himself but he was out of bullet. Suffice to say this is a sad outcome but not
totally shocking given the psychological state of mind of an accused person
especially an innocent one.
My job as a first-year
state counsel at the department of public prosecution exposes me to a lot of
criminal prosecution. I get to see accused robbers, murderers, child-molesters
and the likes of them in the prosecution of offenders in pursuit of the
administration of criminal justice. I observe that the usual countenance of the
officers of the state, the police, the warders that keep these accused persons
in custody is usually one of guilt and indifference; and this is before they
have been convicted by the court.
I have observed lawyers in
court converse with their colleagues, Judges, Investigating Police Officers
(IPO), families of the accused person in a way that is very indifferent to the
course of the accused while the latter looks on sadly often times physically
and emotionally drained from his place at the dock. For some reasons, his
lawyer after arguing sternly about the unfairness of not responding to an application
by the opposing party leading to a further delay in his incarceration and
count-down to his acquittal still manages to share a hearty laugh with his
colleague just shortly after been upset. I would often look at the dock to see
how they feel. Does this person feel like his lawyer or the judge doesn’t care
enough for his situation to find humour in his very saddening situation?
I know that as lawyers we
are taught in school and in the course of early practice to learn to distance
our personal feelings from our jobs. I think however that we need to do more.
We need to care more. A person living in a deplorable state in incarceration
while his life hangs in the balance doesn’t understand that you do this every
day and it is usual to see criminals now and then hence your immunity. If we
are to even consider a state where opposing party doesn’t care whether an
accused person is innocent or guilty I think it is the duty of his own lawyer
to do more. It is absolutely unfair and cruel to laugh at silly things in court
while your client is unsure of his future survival.
The job of a lawyer is not
only to ensure exoneration of his client, he also owes him a duty of care; a
humane feeling towards his plight when the latter is going through the process.
This I believe will to a large extent reduce depression and suicidal thoughts
from the state of mind of an accused person.

Mediation and the Courts | DmediationLawyerist
Vivian Nwobi - Making Boards Effective: The Role of the Company Secretary
Legal Arrangements For Children Without Parents Or Guardians In Nigeria| Temitayo Ogunmokun