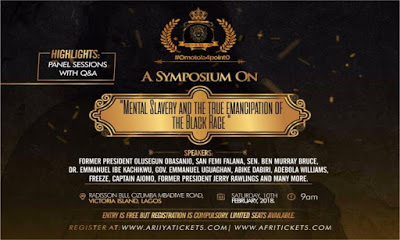 I believe most
people have an idea of what it means to be mentally enslaved or at least
believe that they do. Some will think of it as a distant mental state, that
plagues others but of which they are immune. What would you say if I told you
that 99% of all Nigerians are mentally enslaved.


10. Nigerians, most especially the youths must engage government and leaders continuously. Social media trends can be great for calling the attention of government to issues but it is not enough, especially when the energy is not channeled right.
In our emotional
emancipation, we must identify a healthy sense of self-esteem; to be free from
all thoughts of mediocrity, to learn that we can compete as a nation, as a
people on a global scale.
We must see
ourselves beyond the negative stereotypes. It requires no professional degrees
or complex government structures, policies, agencies or investigative
panel. It requires only a 4 letter word – CARE. You may be surprised at
what sort of solution I am proffering but you would be surprised to learn that,
something as simple as caring and kindness is far from us.  Allow me to
illustrate further, sometime a few years ago, while studying for my Masters in
International Business Law in London, I was walking into a bank somewhere in
the Stratford, East London. Their bank doors are not similar to ours, they do
not have those intimidating security doors that’s takes one person at a time,
it was just a glass door. The White lady in front of me held the door for me
but I just walked through and let the door swing shut. But the person walking
in behind me almost walked into the door. I immediately felt bad and realized
at that point that I had failed in my social responsibility. I had to apologise
to the person and always held the door for others behind me since that day. Further
because I realized it was part of their culture to just look out for one
another, irrespective of race or colour, a kind of social kindness I had not
experienced before.
But replay that
same scenario in Lagos and you would get a different reaction.  If you mistakenly go further to complain, you
may get a response such “Oga, you sef no get eye”,” You no fit see say door dey
there” or “na me be your gateman ni?”. Not surprisingly, 2 weeks  ago, I was walking into church on Sunday and
the I had to catch the door before it hit my face, because the gentleman who
was ahead of me just let it swing shut without minding the faith of the person
coming behind. Thank God say I get eye.

But I reminded
myself that day of our painful past and experiences, we
have become an uncaring people and I don’t just speak about Nigerians, I speak
about the black man as a whole. Going forward Nigerians must not see
material realities as testimonies but as tools of effectiveness. Like my
mentor, Olakunle Soriyan says, we must realize that it is the smallest of our
character that makes a man acquire a thing and think that his life can be
better because of it. We must audit our sense of mission and ask questions
about our morality and what the material can represent. We must ask serious
questions of our lifestyles. We must reject the impulsion to use our skill and
position as a means of showcasing our nuisance value but use them for deeds
that society can be grateful for. This is critical and must be done as a matter
of supreme urgency.
Adedunmade
Onibokun
dunmadeo@yahoo.com
#Omotola4point0