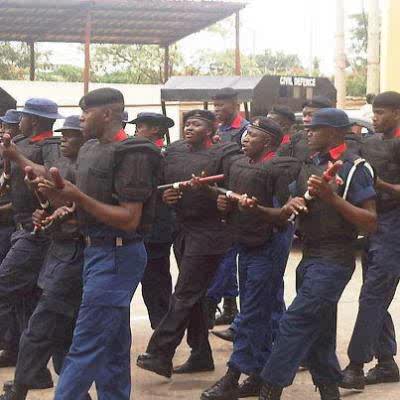 The Nigeria Security and Civil Defence Corps was first introduced in May 1967 during the Nigerian Civil War within the then Federal Capital Territory of Lagos for the purpose of sensitization and protection of the civil populace. It was then known as Lagos Civil Defence Committee.
On inception, the Corps had the objective of carrying out some educational and enlightenment campaigns in and around the Federal Capital of Lagos to sensitize members of the civil populace on enemy attacks and how to save themselves from danger as most Nigerians living in and around Lagos territory then had little or no knowledge about war and its implications.

In 1984, the Corps was transformed into a National security outfit and in 1988, there was a major re-structuring of the Corps that led to the establishment of Commands throughout the Federation, including Abuja, and the addition of special functions by the Federal Government.
On 28th June 2003, an Act to give statutory backing to the NSCDC passed by the National Assembly was signed into law by Chief Olusegun Obasanjo, GCFR, the former president and Commander in chief of the Armed Forces, Federal Republic of Nigeria.

By virtue of the new law, the Civil Defence Corps has the following duties:

•    Assist in the maintenance of peace and order and in the protection and rescuing of the Civil population during the period of emergency.
•   Recommend to the Minister the registration of private guard companies,
•    From time to time, inspect the premises of private guard companies, their training facilities and approve same if it is up to standard.
•   Supervise and monitor the activities of all private guard companies and keep a register for that purpose.
• Periodically organize workshop, and training courses for private guard companies and seal up any private guard company which operates without a valid licence.
• Maintain twenty-four hour surveillance over infrastructures, sites and projects for the Federal , State and Local Government.
• Enter and search any premises and seize any material suspected to have  been used in vandalization or suspected proceed of vandalization.
• Enter and search premises of any suspected illegal dealer in petroleum products or material used by Power Holding Company of Nigeria, Postal Services, Nigeria Telecommunication or for any other public utility or infrastructure;
• Have power to arrest with or without a warrant , detain , investigate and institute legal proceedings by or in the name of the Attorney-General of the Federation in accordance with the provisions of the constitution of the Federal Republic of Nigeria against any person who is reasonably suspected to have committed an offence under this Act or is involved in any:
(i)                  Criminal activity
(ii)                Chemical poison or oil spillage nuclear waste, poisoning
(iii)               Industry espionage or fraud;
(iv)              Activity aimed at frustrating any government program or policy;
(v)                Riot, civil disorder, revolt, strike, or religious unrest.
(vi)              Power transmission lines, oil pipelines, NIPOST cables, equipment, water boad pipes or equipment vandalisation
•    Monitor the activities of religious bodies and trade associations.
•   Monitor, investigate, and take every necessary step to forestall any planned Act of terrorism particularly.
–       Cult and Ethnic militia activities
–      Criminal activities aimed at depriving citizens of their properties or lives
–       Syndicate activity aimed at defrauding the Federal, State or Local Governement;
•   Monitor, investigate, and take every necessary step to forestall any act of terrorism and report same to appropriate Federal Security Agency.
•   Provide necessary warning for the civilian population in times of danger
•    Evacuate the civilian population from danger areas.
•     Provide and manage shelters for civilians during period of emergency.
•  Asist in the decontamination and in the taking of precautionary measures during any period of emergency.
•  Carry out rescue operations and control volatile situations.
•  Assist in the provision of emergency medical services, including first aid, during any period of emergency.
•  Detect and demarcate any danger area.
•  Assist the Federal and State Fire Service in Fire-fighting operation.
•   Assist in the distribution of emergency supplies.
•   Provide assistance to restore and maintain order in distressed areas in any period of emergency.
•   Assist in repairing indispensable public utilities during any period of emergency
•   Provide intelligence information to the Ministry on any matter relating to:
(i)                  Crime control generally;
(ii)                Riot, disorder, revolt, strike or religious unrest;
(iii)               Subversive activity by members of the public aimed at frustrating any government programme or policy;
(iv)              Industrial action and strike aimed at paralysing Government activities;
(v)               Any other matter as may be directed by the Minister;  and
(vi)              Have power to arrange and mediate in the settlement of disputes among willing members of the public.

Family Law Dynamics in the Face of Current Realities of the 21st Century
Young Lawyers in Litigation: Future or Fulcrum of the Profession?  | By Nonso Anyasi.
File your Police Compliants via @policeNG_CRU