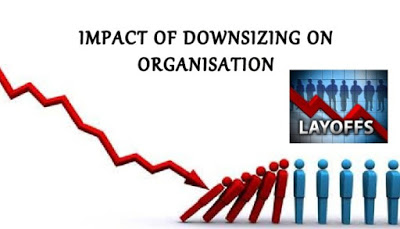 Companies seeking to
effect organizational through the medium or process of downsizing may find that
the means to such an end may be flawed, causing more harm than doing any good.

Downsizing is the process
of reducing staff numbers and/or divisions of a company and has been a
widespread change practice since the 1970s. Fortune 500 companies have been
recorded to have cut back on their collective workforce by 1,040,466 in 2001
alone. Reasons for engaging in this change process range from restructuring,
cost cutting or savings, selling of a business unit, increasing productivity or
responding to external pressures such as recessions or economic down turns.

Share prices may rise with
such an announcement for publicly traded companies, but then often fall,
trading at or below market over a two year period. This action can have further
social and psychological effects on employees – especially on those who remain.
A number of these scenarios occur during downsizing exercises and others
afterwards, perhaps immediately after or over time, precipitating inefficiency
and low productivity. There are negative consequences of downsizing, some of
which are:
1.
Political gaming and lobbying increases
during downsizing in order to retain positions, sometimes at the overall
expense of the organization.

2.
Employees unscathed by the exercise may
doubt their future in the company which could impact on productivity
negatively.

3.
Core competences could be lost or
underutilized because they were linked to people who were lost in the
downsizing.

4.
Reduction in morale and guilt feelings as
retained employees attempt to validate/justify their own retention, wondering
if they may become victims of future downsizing.

5.    Non-selective and unplanned downsizing
could call into question the necessity and effectiveness of the overall
exercise which could strain employer-employee relations.

6. Disruption of informal networks and
subcultures that exist in all organizations previously drawn upon to implement
organizational work.

Downsizing in of itself
will not necessarily lead to gains in productivity where it is not associated
with other changes in business strategy and as such organizations embarking on
such a change exercise must ensure that the benefits outweigh the costs which
should be beyond only pure financial motives as managing retained employees
presents its own challenge and could undo the original intent of the act.
Ed’s Note: This article was initially posted by the author via this link https://www.linkedin.com/pulse/downsizing-its-latent-implications-aloaye-david-gibiri?trk=hb_ntf_MEGAPHONE_ARTICLE_POST (Last visited on 11/10/16)