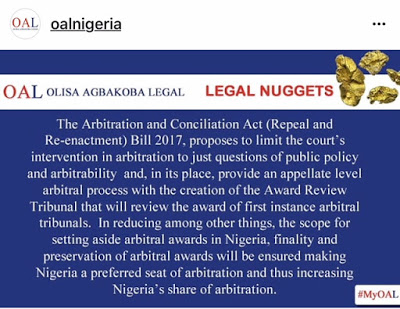 The judicial system has proven extremely
inadequate at processing cases or enforcing decisions. Courts are slow and
generally considered inefficient for reasons that include funding, poor
physical facilities, staff shortages, congestions, and inadequate training etc.
The average duration for the resolution of cases in Nigerian courts is between
10 – 20 years spanning the entire tiers of the judicial system. This is
evidently unmanageable in any economy.

The enforcement of commercial
contracts or settlement of disputes continues to be a primary concern for
entrepreneurs and investors. Economic reforms and investment growth are hardly
achieved and barely successful in face of dispute resolution constraints. The
reason is that Litigation has become such a major bottleneck to business that
it is no longer seen as an effective mechanism for timely resolution of
commercial dispute. Reliable alternative methods of resolving commercial
disputes became imperative hence the introduction and wide acceptance of
Alternative Dispute Resolution (ADR) processes or mechanisms.
Arbitration has become the established method
of determining international commercial disputes. All over the world, states
have modernized their laws of arbitration to take account of this fact. In a
recent survey conducted by White and Case, in collaboration with Queen Mary
University, School of International Arbitration on the Improvements and
Innovations in International Arbitration, 90% of the respondents to that survey
confirmed that international arbitration is their preferred dispute resolution
mechanism.
New arbitral centers are being established
and there is rapid development of law and practice of arbitration. International
treaties such as the New York Convention of 1958 on the Recognition and
Enforcement of Foreign Awards as well a body like UNCITRAL[1]
is essential to the effectiveness of Arbitration internationally.
The attraction is that international
arbitration is conducted in different countries and against different legal, cultural
backgrounds with a striking lack of formality but upon certain and acceptable
international standards, norms and ethics.
Records support the establishment and effectiveness of arbitration
institutions. International institutions driving arbitration includes the ICC
in Paris, SIAC in Singapore, LCIA in London, HKIAC in Hong Kong. In addition to
arbitration services provided by these institutions, they set rules and other
procedural requirements which attract users universally.
Nigeria generates a significant volume of
commercial transactions (both domestic and international with about 80 percent
of these transactions originating or terminating in Lagos). Unfortunately,
dispute arising from these transactions are ultimately arbitrated in foreign
countries. This situation has been attributed to the inadequacy and efficacy of
Nigeria’s legal and institutional framework for Arbitration. The “flight” of
“domestic” (i.e. purely Nigerian) arbitration cases to arbitral venues outside
Nigeria is unhelpful to Nigeria’s economic empowerment and development strategy
programme (NEEDS). It also means loss of revenue for majority of lawyers and other
ADR practitioners. Various efforts and proposals have been made at the national
level and some states too. The Repeal and Re-enactment Bill of the Arbitration
and Conciliation Act 1988 currently before the legislature makes an attempt at
addressing this issue. What is required is a commitment and affirmative steps
for actualization of the proposals.
In line with promoting policies which
encourage the development of arbitration in this region, there is currently a bill
before the National Assembly for the amendment of the Arbitration and
Conciliation Act (ACA) 1988. Under the present 30
years old framework, lengthy and expensive are words that are often used to
describe arbitration proceedings in Nigeria. These are words which should not
be associated with arbitration as a means of dispute resolution. The reform will
help the argument for making Nigeria a preferred seat of arbitration and thus
increasing Nigeria’s share of arbitration.
The Olisa Agbakoba Legal Mediation and Arbitration Center submitted a
proposal to the House Committee in charge of the repeal and the re-enactment of
the Arbitration and Conciliation Act. Our proposal seeks to introduce in the
Bill an opt-in provision for fixing the seat of arbitration in Nigeria. We propose that where
parties have failed to determine Seat and Place of the Arbitration, the
Arbitration tribunal should revert
to Nigeria as the forum or seat for the Arbitration. This would invariably promote the growth of the industry and also encourage
investment, drive economic development and improve Arbitration practice and
culture amongst Arbitrators and relevant professionals. 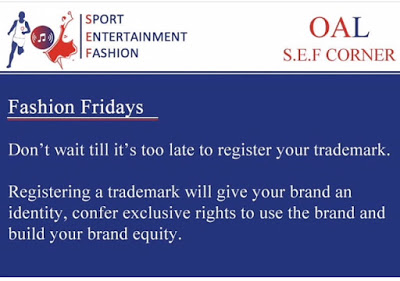 Another example of policies that drive the
growth and culture of arbitration is the Lagos Arbitration Law 2009. Lagos
remains the commercial hub of the nation with the potential of becoming an
international financial and investment center in Africa. However, it requires an
efficient commercial dispute resolution environment founded on enabling legal
and institutional frameworks. In United Kingdom, the London Court of
International Court of International Arbitration (LCIA) in London derives
tremendous support from the London City Corporation with the London Chamber of
Commerce as one of the core drivers. In view of foregoing, affirmative action
could be taken by a state like Lagos. During my tenure as the NBA President,
precisely in 2008, I made a proposal to the Lagos State Government on the need
for establishment of a Domestic Arbitration Center in Lagos as a pilot
initiative. The state then started the process by introducing ‘a Bill for a Law to provide for the
establishment, management and operation of a Center which would act as a Court
for Commercial Arbitration as other Dispute Resolution (ADR) Mechanisms in
Lagos State and for connected purposes therewith’. This resulted in the
establishment of the Lagos Court of Arbitration in Lekki, Lagos.
In Nigeria, business managers (or their legal
advisers) who have to decide on the advantages of choosing Nigeria as an arbitration
forum will be interested to see that the appropriate frameworks are in place. What
prevails at Ad Hoc Arbitration and ADR bodies applying different kind of rules;
favourably and unfavourably to the parties. Nigeria has commercial centers like
Lagos, Abuja, Port Harcourt and Kano with the potential of becoming
international financial and investment centers in Africa. A national culture of
Arbitration is imperative as a framework and symbol of institutional
arbitration.
In fact, a national culture or policy on
arbitration will galvanize the improvement of domestic arbitration and provide
the platform for development and standardization of Ad hoc Arbitration process.
As an international organization, the Regional Center for International Arbitration
(RCIA) Lagos is constrained to drive the kind of national support required for
development and practice of Arbitration. The fact is that Nigeria can emulate
the practice in successful jurisdictions like Singapore or Malaysia, which have
strategically positioned themselves in their regions as arbitration hubs,
generating enough dispute resolutions to act as a catalyst in the development
of their respective economies. They achieved this by a national policy and
culture of arbitration. Another country that has seen significant development
by adopting a national policy in arbitration recently is Rwanda with the
establishment of the LCIA-backed Kigali International Arbitration Center. Mauritius
and Egypt have shown themselves to be sound choices for African arbitral seats,
and their use in intra-African arbitrations should be promoted.
It is worthy of note that not one African
arbitration centre has attained its full potential. This could be attributed to
the fact that there are simply too many of them. Limited resources should be
channeled efficiently for the development of three or four regional centres,
which are fully equipped with state-of-the-art facilities and information
technology. If establishing a regional centre faces too much red-tape, then governments
should consider simply promoting those African institutions which have
successfully established themselves (such as the LCA, CRCICA, Mauritius
International Arbitration Centre and the KIAC which have all struck the right
balance between being supported by their respective governments, without
control or interference from them), and making them the default choice in their
contracts. This removes an item from public expenditure, and may have benefits
in terms of the political leverage to be gained from encouraging the use of one
or more of these centres.

Next Steps –
Under the tenure of the former Attorney
General of the Federation, Prince Bola Ajibola, the Nigerian policy of
Arbitration was at its height. It was under this tenure that the Regional Center
of Arbitration was setup. The Government needs to promote its arbitration
policy by fully backing a center of arbitration. The Lagos Court of Arbitration
(LCA) undoubtedly, has potential to become a powerhouse in international
arbitration in West Africa. Its strong institutional rules and the recent
development in arbitration legislation in Nigeria demonstrates that it can gain
the trust and acceptance of the region, and this should be a good springboard
from which to build an international arbitration centre and a regional
arbitration hub.
If this centre was promoted in intra-African
arbitrations, then it would build a track record of international arbitrations
(albeit from other African countries), and gain enough credence to administer
non-African arbitrations.
Stakeholders such as banks, maritime
operators, government agencies need to propel the development of arbitration by
keying into the sector. Contracts in these sectors need to contain arbitration
clauses. Disputes resulting from such contract should be arbitrated in Nigeria.
There should be no reason for a purely Nigerian dispute between Nigerian
parties to be arbitrated in London. There is a need to grow the Nigerian
arbitration jurisprudence and expertise.
Stakeholders also need to engage Presidential
Enabling Business Environment Council (PEBEC) on the ease of doing business.
The council must understand that for there to be growth or development in
Arbitration, an arbitration policy is crucial. Investors need to be assured
that in the event of any dispute, there is an efficient legislative framework
on arbitration to resolve such commercial dispute.
Conclusion – Telling the World
Nigeria must be cognizant of its bargaining
power. In the scramble for resources, investors will be forced to accept local
or regional arbitral systems and/or African seats, or risk losing deals.
Indeed, in a survey conducted by Simmons & Simmons in 2015, 72% of
respondents said that they would consider using local or regional arbitral
systems, and 58% said they would use an African seat.
In order to develop arbitration in this
region and prop Nigeria as a regional hub in West Africa, it is incumbent on us
to take active steps to increase awareness. We must build up the capacity of
our arbitration centres, then market them aggressively. We must make
legislative reforms an agenda priority, then publicise them widely. Stakeholders
need to develop more seasoned Nigerian Arbitrators by encouraging partnerships
between international law firms and locally-based firms. This will enable the
transfer of knowledge and skills, and the opportunity to gain from the wealth
of experience which international law firms have to offer, in order to build
local capacity.
In all these efforts, it is important to act
quickly and capitalize on the current interest in the continent and Nigeria, as
this will eventually wane. If we are successful, perhaps what might emerge is a
more mature Nigerian arbitration jurisprudence, and evolution of an
African-centric style of arbitration, or at the very least, one in which Nigeria
has had an influence.
The culture and policy of arbitration in
Nigeria is still at its infancy.
[1] United Nation Commission
on International Trade Laws