Young Lawyers in Litigation: Future or Fulcrum of the Profession?  | By Nonso Anyasi. 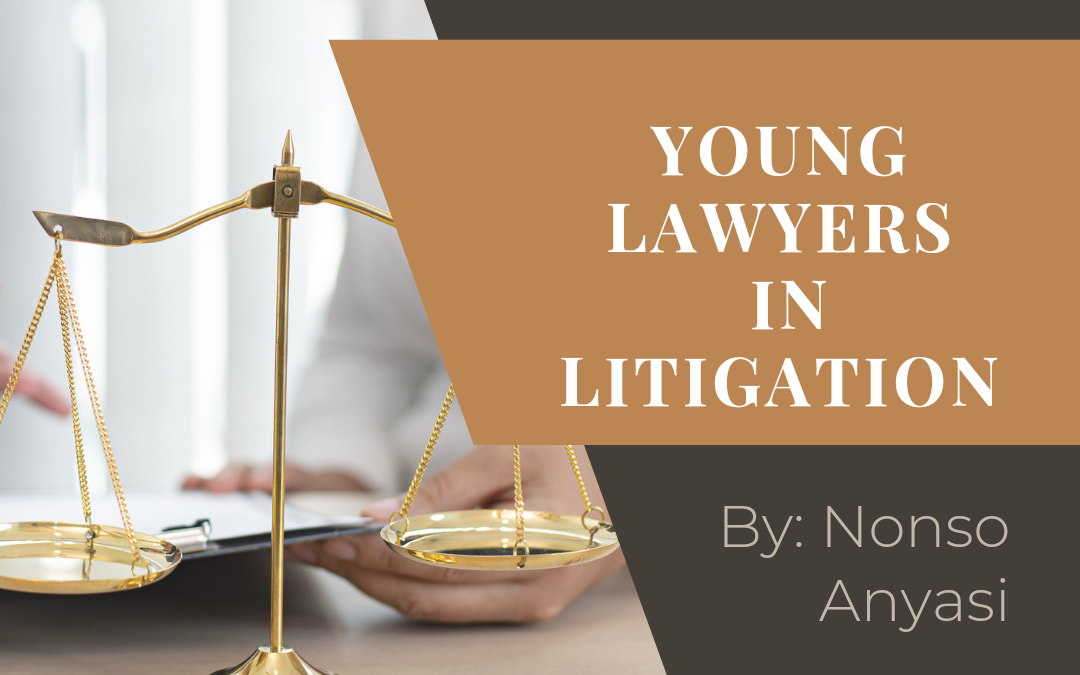 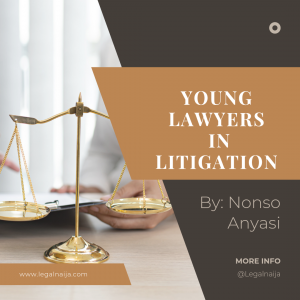 The Nigerian Bar Association classifies young lawyers as persons who have been called to the Nigerian Bar and qualified to practice law in Nigeria within the last seven years. Seniority at the Nigerian Bar is not dependent on the biological age of the lawyer, but rather on the years of legal experience which a lawyer has, commencing from the date of their call to the bar.

There is no Senior Advocate of Nigeria, Professor of Law, Justice of any court or legal scholar who did not begin their legal career as a young lawyer in Nigeria. Even persons who were long qualified to practice as legal practitioners in foreign jurisdictions before being called to the Nigerian Bar are also referred to as young lawyers in Nigeria for the first seven years from the date of their Call to the Nigerian Bar.

The Role of the Young Lawyer in the Litigation Firm

The role of the young lawyer in the Nigeriandispute resolution sector cannot be over-emphasized. Young Lawyers are the foot soldiers of almost every law firm and legal department in the country. They are engaged in almost every stage of the delivery of legal services to Clients. Their participation is direct and their impact is heavily felt. Even though young lawyers mostly work under strict supervision of their senior colleagues like infantry soldiers under the command of their superior officers, they are responsible for giving life to the policies and position of the firm.

Ideally, young lawyers are present during the briefing stage – when Clients narrate their problems or dish out instructions to the firm. They also engage in preliminary research of the clients’ problem and identify the legal issues involved in every problem. They also participate in the provision of actual solutions to the problems.

After the final writ is produced, young lawyers often oversee the filing of the writ and follow up with procedural matters such as service and procuring hearing dates for the matter. Although some firms employ litigation clerks/assistants to handle these clerical roles, the reality is that most young lawyers in Nigeria also double as litigation clerks with these extra responsibilities.

The traditional role of the young lawyer extends to appearing in court for non-contentious matters, such as when the matter comes up for mention, or for hearing of simple applications i.e. for substituted service. Young lawyers are expected to build their experience by paying attention to other matters in court, especially when much senior lawyers are conducting their proceedings. Some young lawyers are lucky to have the good fortune of being allowed to handle trial or hearing of their substantive matters at an early stage in their career.  Others have to be content with appearing together with the senior lawyers in their firms on the day of trial/hearing, until they receive a golden opportunity to handle their own trials/hearings.

Young Lawyers in the Appellate Courts: A Dangerous Experiment?

This position is usually the same at the appellate courts where the young lawyers are often tasked with preparation of the first draft of the notice of appeal and also the briefs of argument used at the appellate courts. This writer however questions the wisdom behind leaving critical matters on appeal to inexperienced young lawyers. The practice of allowing young lawyers have the first bite at an appellate cherry is not peculiar to only Nigeria, as it extends to other jurisdictions. An American legal author once decried this practice in the American courts when she wrote as follows:

“It is the trial of the most important case in your career, the case that you have been working on for years; and the most important witness on the other side has just finished direct testimony. The cross-examination is the moment you have been waiting for, the key, the pivotal part of the trial, the make-or-break of the entire case. And so, of course, you hand over the cross-examination to the most junior, the most inexperienced, the least knowledgeable lawyer on the team. Sound crazy? Of course it does. Yet, this –unfortunately – is a fairly description of what goes on in law firms across the country when it comes to appeals.”[1]

Undoubtedly, the resolution of disputes at the appellate courts is much different from litigation at the trial courts because while the fate of matters at trial courts depends largely on the advocacy of (senior) counsel during trial/hearing, the fate of a matter on appeal is almost wholly dependent on the quality of the briefs of argument filed. A critical examination of most judgments of the Court of Appeal and the Supreme Court will show that the deciding justices pay only very little attention to the oral arguments made by counsel at the hearing. The briefs of argument are the prominent and significant feature of any appeal.

Admittedly, younger counsel need every experience they can get to sharpen their brief-writing skills. They need to be tutored extensively on the nitty-gritty of appellate brief writing and procedure in order to become well-versed in the process themselves. This experience is best gotten from close supervision by their senior colleagues and not merely by delegating the entire workload of development of the brief of argument to the younger counsel, which could prove to be very fatal in the long run as the inability to appreciate the crucial issues on appeal will almost definitely result in doom for that party.

There has been a declining interest in litigation by young lawyers all over the country in recent times as a result of the unattractive salary associated with young lawyers in litigation. The insalubrious delays associated with our court system has not helped matters. Young lawyers prefer to look at greener pastures in the corporate sector with its promise of exciting and highly rewarding practice areas.A great number of young lawyers in Nigeria are millennials who are naturally impatient and eager to reap quick rewards of their labour. They are largely uninterested in practices and ventures which do not yield immediate results.

A young lawyer working in a tier 1 commercial law firmrecentlyresorted to social media to classify young lawyers working litigation firms “slaves” of the profession. He claimed that these lawyers aremostly sent to police stations to handle bail applications and to hot stuffy courtrooms to file and argue motions. These “slaves” are not deemed worthy of any further specialized training beyond what is taught at the law school, and are often remunerated with “peanuts”. This self-acclaimed classifier of lawyers contends that young lawyers practicing in the corporate field are the “princes” of the legal profession – mostly sent out for lofty board meetings and frequent professional trainings within and outside the country with fat salaries and bonuses to compensate their princely status.

Although this classificationof young lawyers is indeed disrespectful as it is divisive, it sadly reflects the “reality on ground”. Traditional employers of litigation lawyers are unwilling to sponsor or send their young lawyers out to attend quality professional trainings, but these same employers expect the young lawyers to operate with the passionate efficiency of the late ChiefGaniFawehinmi SAN and the intellectual sagacity of the late Niki Tobi JSC. It is indeed sad that some of these employers refuse to release the young lawyers in their firms to participate in even the free seminars organized by the Nigerian Bar Association and other professional bodies within and outside their immediate jurisdiction.

Elevating the Slaves to Princely Status

The legal market which provides legal services to clients thrives on the abundant supply of qualified practitioners available to clients. This supply of litigation lawyers is however under risk of decline, given the growing disinterest in litigation amongst young lawyers who rather favour more lucrative areas of law such as corporate commercial practice.

The decline in supply of dedicated young lawyers to the litigation practice sector will affect the quality of services rendered, as senior lawyers would be forced to handle a greater part of the work ordinarily done by young lawyers, which would affect quality of output produced by the firm.

Thus, it is necessary to address the crucial economic factors responsible for driving young lawyers away from litigation practice to ensure a renewed interest in this essential area of legal practice. This issue of remuneration of young lawyers was a deciding factor in the previous NBA national elections held in 2020, with many candidates promising to make it their primary concern. Some branches of the NBA have set up committees to look into the pressing issue of remuneration of young lawyers, and so many anonymous forms have been sent to young lawyers all over the country to collect the necessary information needed to combat the issue.

After his victory at the polls, the OlumideAkpata-led national administration of the NBA reportedly set up a committee to address the burning issue of the poor remuneration of young lawyers, in line with his specific promises which saw him emerge victorious at the national elections. There has however been a deafening silence from both the national headquarters of the NBA and the committee on this remuneration issue since the administration came on board and the stage is already being set for the next national elections…

Nonso Anyasi is a member of NBA Lagos Branch and can be reached via nonsoanyasi@nigerianbar.ng

Legalnaija Business Monday - Electronic Transactions Bill
#NBASpidel2021: Special Invitation To Participate At The NBA Section On Public Interest And Developm...
Compensation for injury in the Workplace