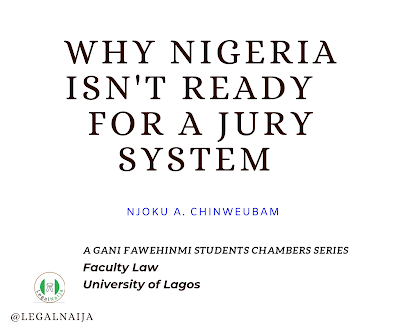 A
nation that is still being held captive by the unrelenting grip of corruption,
and is constantly plagued by political and economic instability, has no
business pursuing a Jury system. Nigeria is one such nation. A jury is a historic
legal institution in which a group of laypersons participate in deciding cases
brought to trial.
It is a group of people randomly selected by a judicial
district who are charged with the responsibility of deciding whether, on the
facts of the case, a person is guilty of the offence for which he or she has
been charged. It flows from this definition that Nigeria, in the current state
that she is, cannot in any way achieve justice by conducting a trial using the
jury system.

The
law requires a juror to be completely unbiased and without any conflict of
interest. A conflict of interest is when a person has knowledge of the case,
such as knowing one of the people involved, that may unfairly influence their
fact-finding abilities. How possible is it that one such person can be selected
to carry out jury duty? In developed nations like the United States of America and
Canada, who like Nigeria, practice a common law legal system, that can readily
be achieved. However, unlike these nations Nigeria is a country where bribery
and corruption is the order of the day, a country where many a man can get what
he wants from whoever he wants provided he has and offers the right incentive.

Corruption
has eaten deep into the governance and administration of Nigeria and it is easily
the major hindrance to the smooth and rapid growth and development of the nation
state. Nigeria first featured on the Corruption Perception Index (CPI) in 1996 and
has more than once been ranked as the most corrupt country in the world. What
are the odds that an unbiased Nigerian can be selected to sit in a trial as a
juror? Next to nothing. Nigeria is still in the process of learning to conduct a
free and fair election, which is one of the salient features of modern democracy,
and her progress appears to be infinitesimal or nonexistent. Over the years, after
every election, appalling stories of rigging and various malpractices at the
polls are circulated by word of mouth and the mass media. How successfully then
can any such jury selection process be conducted in Nigeria? As it is, a jury system
is likely to do more harm than good to our judiciary that is already faced with
the struggle of being and remaining independent.

Nigeria’s
colonial history, together with her practise of the common law legal system, is
another vitiating factor. A common law legal system is characterised by the
absence of codes, an inductive method of legal reasoning, judicial precedents, to
mention a few. A jury system is not a common feature of the common law, as a
result, most common law countries do not practice it. Nigeria, by virtue of her
being a former colony of Britain, is a common law country and her legal system
is strongly entrenched in the principles of stare decisis or judicial
precedents. Stare decisis advocates for a strict adherence to the decisions
of higher courts of law by the lower courts. The Nigerian Legal System attaches
importance to courts based on their position in the judiciary hierarchy. In
other words, there is no place for a jury in the Nigerian system of
adjudication. The Nigerian 1999 Constitution (as amended) in section 6 vests
judicial powers on the courts and also describes how these courts are to be constituted.
This provision does not include a jury system. To introduce a jury system into
our stabilized court system would be to disrupt a sound legal custom and a
system of rules that have been laid down and adhered to for decades. There is
no saying how long such an adjustment would take to get used to, nor is there a
way to point out how much damage the inclusion of a jury system would do to the
effective and efficient administration of justice in Nigeria.

Furthermore,
Nigeria is a federation characterised by diversity along ethnic, cultural and
religious lines. It suffices to point out that the Nigerian dream is a
heightened sense of nation building despite our various ethnic and religious
differences however, unfortunately, we are yet to achieve this. Many disputes
have arisen as a result of our inability to regard one another as ‘Nigerian’ and
not ‘Igbo’ or ‘Hausa’. Most of the crises in Nigeria today are the results of ethnic
or religious discrimination and it now appears that the very substance that
makes us is breaking us. Now a jury system requires a random selection of jurors
with requirements that more than half of the population is bound to be capable
of meeting. For instance, in the United States, a jury begins with a call for
jury duty. To be eligible for jury duty, one must be a legal citizen of the
U.S., be at least 18 years old, have no record of felony crime charges, be able
to speak English, and live in the jurisdiction, or area in which the jury is called,
for at least a year. Now in a multilingual and multiethnic society like Nigeria,
where tribalism, favouritsim and ethnicity is prevalent, how then can 12 people
(more or less) be selected without chaos arising from one ethnic group raising
an objection that his tribe was not represented? Or that the jurors are mostly
of a particular tribe or ethnic group? In a trial where a quarter of the jurors
are of the same ethnic group, how can the element of bias be successfully
eliminated?
What
can be inferred from the above assertions is that indeed Nigeria is not
prepared for a jury system. A jury system cannot survive in a country that is
corrupt. Many criminals and offenders will go scot free as long as they are
able to bribe one or all of the jury. The purpose of the law would therefore be
defeated. Also with how regimented the Nigerian legal system is, introducing a
jury system is bound to be a tedious, ineffective task as it would disrupt the laid
down principles and rules of our court system. In addition, to the extent that
ethnicity and tribalism continue to thrive amongst Nigerians, a jury system can
never do any good to the administration of justice in Nigeria. However, if the
issue of corruption amongst the citizens, public officials and the people in
the government can be properly addressed, if the judiciary can be statutorily expanded
to include a jury, and if tribalism can be made a thing of the past, then maybe
a jury system can be introduced into the Nigerian legal system. Until then, Nigeria
remains unprepared for a jury system.
©Njoku
Augusta Chinweubam
Gani
Fawehinmi Students Chambers
Faculty
of Law
University
of Lagos