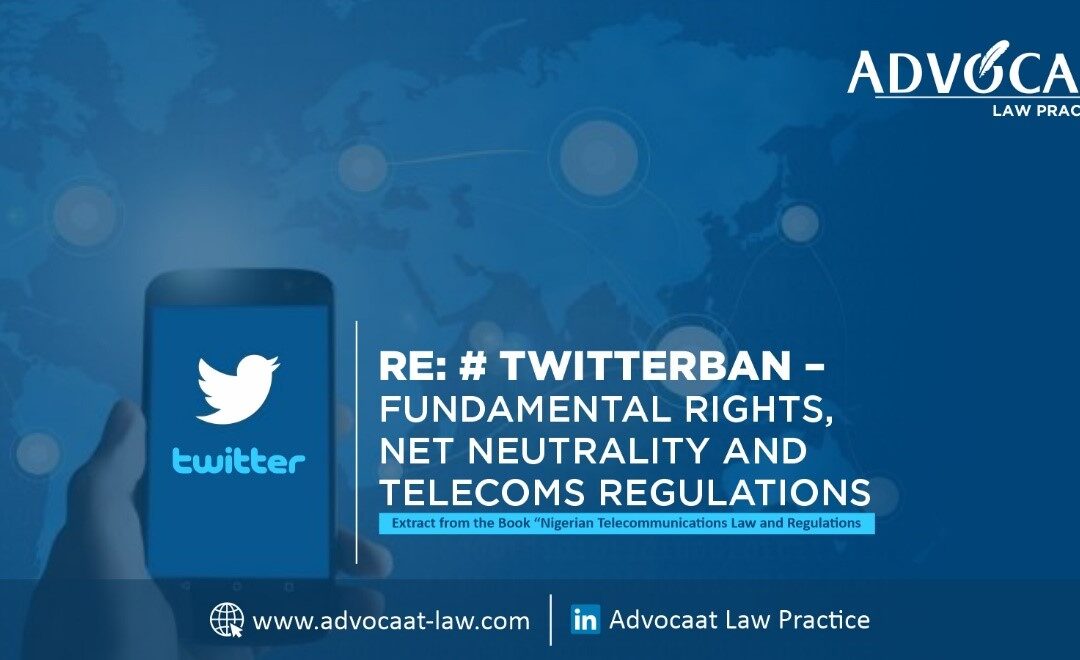 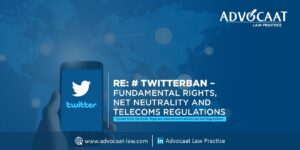 As with other fundamental rights in Chapter IV of the Constitution of the Federal Republic of Nigeria (CFRN), the guarantees in Section 37 -40  are subject to the omnibus limitation in Section 45(1) which excuses any law passed to abridge the right where such laws can be ‘’reasonably justifiable in a democratic society in the interest of defence, public safety, public order, public morality or public health; or for the purpose of protecting the rights and freedom of other persons”. This provision is consistent with international instruments such as Charter of Fundamental Rights of the European Union which permits similar derogations.[1]

Implicit in Section 37 of the CFRN are two fundamental tests for justifying derogations. The first is objective, and the second is subjective. These are:

This principle was upheld generally in the judgement of the Supreme Court in INEC v. Musa.[2] With specific reference to telecommunications and ICT, the Court of Appeal in Okedara v. A.G Federation upheld the provisions of Section 24 of the Cybercrime Act, 2015 which prohibits dissemination of indecent content through computer and/or telecommunications systems and held that the provision does not violate the provisions of Sections 36(12) and 39 of CFRN.[3]

Essentially, any law which seeks to abridge the privacy right (for legitimate public interest) must trace legislative authority to, and derive its validity from Section 37, CFRN.  Similarly, such abridgement can only be done by a subsidiary instrument if the main legislation provides clear legal basis and authority for such abridgement.

From a telecoms regulatory perspective, two key issues arise. These are the issue of content regulation and access (tariff) regulation.

The basic principle of net neutrality is Internet Freedom, and it is generally recognised as a human right. By implication, this right is constitutionally guaranteed in Nigeria by Section 39(1) of the Nigerian Constitution which protects the right of every person to “freedom of expression, including freedom to hold opinions and to receive and impart ideas and information without interference“ and Section 39(2) which protects the right to “own, establish and operate any medium for the dissemination of information, ideas and opinions“.

This freedom does not however preclude regulation, which empowers institutions of government or the private sector to guide action towards the achievement of predetermined goals pertaining to safety, national security and/or social and economic well-being (including the avoidance of legal liability). In this regard, Regulatory instruments would include Laws, Bye-laws, and Codes of Conduct/self regulation instruments and contracts[4]. Regulation thus defined can be contrasted with censorship, through which governments restrict access to content which they object to on political, cultural or other grounds, regardless of actual impact.

Many governments however assert a right to censor access and/or content. This right is typically justified by the need to protect security interests.[5]

during periods of national upheavals like the “Arab Spring”); or on a permanent basis (such as China’s “great firewall” and North Korea’s “country intranet” through which they filter content that can be accessed within their respective jurisdictions).[6]

The regulatory imperative is empowered by Section 39(3) of the Nigerian Constitution which approves “any law that is reasonably justifiable in a democratic society to prevent “the disclosure of information received in confidence, maintaining the authority and independence of courts or regulating telephony, wireless broadcasting, television or the exhibition of cinematograph films” or imposing restrictions on public officers and for security purposes.

In this regard, the NCC has developed an Internet Industry Code of Practice which provides far reaching provisions on net neutrality and internet governance.[7]  The Code recognises the standards of transparency and non-discrimination, prohibits throttling, blocking, preferential and/or data prioritisation. It however permits “zero-rating” in limited circumstances, as well as “acceptable traffic management practices”, i.e. those carried out to preserve the “integrity and security of the network, of services provided via that network, and of the terminal equipment of internet users”; to prevent or manage network congestion; or to comply with a law, court order or regulatory obligation.[8] Provisions are also made for data protection, data security as well as the protection of minors and other vulnerable dependents.[9]

The Code reflects the position that as far as governments are concerned, regulation will continue to be justified by security and other national interests such as the need to protect cultural and other values; to ensure safe use for children and other vulnerable population segments; to encourage healthy usage; protect against cybercrime, preserve cultural identity, and develop local content. Censorship on the other hand is difficult to justify if it results in denying citizens the constitutional protections of being able to freely share ideas.[10]

A combined reading of the above-cited provisions of the NCA, the Internet Industry Code of Practice and the VOIP Regulations leads to the conclusion that under Nigeria’s regulatory regime, full net neutrality is required, and both scenarios above are unacceptable. However, scenario (2) above is very common.[14]

It should be noted that the United States officially ended its net neutrality policy in June 2018 through the decision not to renew the 2015 Open Internet Order which protected net neutrality. It remains to be seen how this would impact the practice in other jurisdictions. [15]

Finally, we should note that users are often able to use Virtual Private Networks (VPN) to overreach censorship and/or internet restrictions by either masking their internet protocol addresses, encrypting data to hide their communications from government monitors and also to gain access to blocked content and/or websites. So far, there is no blanket ban on the use of VPN in Nigeria as is the case with North Korea and similar jurisdictions.

[4] All the major internet portals have terms of usage which restrict usage in one form or the other to protect the platform from legal liability for libel, intellectual property infringement, cyberattacks and other hostile action whilst also protecting other users’ legal rights.

[5] The attitude is typified by the statements recently ascribed to the Ethiopian Prime Minister, that “Internet is not water; internet is not air. Internet is a very important. However, if we use it as a revolution tool to incite others to kill and burn, it will be shut down not only for a week, but longer than that… for sake of national security, internet and social media could be blocked any time necessary… as long as it is deemed necessary to save lives and prevent property damages, the internet would be closed permanently, let alone for a week…”see report by Abdur Rahman Alfa Shaban, ‘Twitter backlash after Ethiopia PM’s internet ‘not water or air’ threat’, Africanews.com  (online, 3, August 2019) <  https://www.africanews.com/2019/08/03/twitter-backlash-after-ethiopia-pm-s-internet-not-water-or-air-threat/ > accessed on 4 August 2019.

[6] The easy dissemination of “fake news”, “anti-government  propaganda”, “hate speech” and the notable sensitivity of African governments on these issues led to “at least 12 instances of intentional internet or mobile network disruptions in 9 countries in 2017, compared to 11 in 2016”, and the shutdowns are getting more sophisticated, “targeting smaller groups of people and locations” see Abdi Latif Dahir, ‘There was some good news but also plenty of bad with Africa’s digital space in 2017’ Quartz, December 22, 2017 < https://qz.com/1162891/there-was-some-good-news-but-also-plenty-of-bad-with-africas-digital-space-in-2017/   > accessed on 31 March, 2020; a contentious draft Bill (the Protection from Internet Falsehoods and Manipulation and other Related Matters Bill, 2019, SB 132) is pending before the National Assembly on the issue – it passed its second reading in November 2019.

[9] See generally Paragraph 4 and 5 of the draft Guidelines.

[10] Arguably, the increasing fragmentation of the internet due to divergent privacy regimes and the race to control the provision and adoption of 5G technology may well influence Nigeria’s policy, legal and regulatory regime.

[11] NCC data as at the end of August 2020 shows a total of 149,338,969 mobile internet users (GSM):  10,834 for fixed wired and 422,433  for VoIP users respectively – see current data on the Industry Statistics page on the NCC website at < https://ncc.gov.ng/stakeholder/statistics-reports/industry-overview > last accessed on 6 October, 2020 (note that data on the website is regularly updated).; as noted elsewhere, VoIP here also includes the VoLTE standard.

[12] Examples are the Facebook Lite provided by Airtel Nigeria and the “Social bundles” provided by virtually all the other operators – the former allows free access to a stripped-down version of Facebook while the latter allows users access to certain social media platforms as a “free” or much cheaper add-on to their voice or data subscriptions.

[13] See the report by Brian Jackson, ‘Nigeria faces net neutrality crisis as carriers consider banning Skype’, itworldcanada.com (online, February 22, 2017) < https://www.itworldcanada.com/article/nigeria-faces-net-neutrality-crisis-as-carriers-consider-banning-skype/390884 > accessed on 23 February 2017; it should be noted that Section. 3.6 of the NCC’s draft Internet Industry Code of Practice would permit “zero rating” on a range of subjective criteria, i.e. if it “furthers the objectives of the Act, particularly Section. 1 (c), and policy objectives of Universal Access contained in the National Information and Communications Technology Policy 2012 and the Nigeria ICT Roadmap 2017 – 2020, in accordance with the provisions of the Competition Practice Regulations 2007, and with the approval of the Commission”.

[14] Regulators may need to reflect this pragmatic market dynamic in future regulation by providing a guiding framework to prevent abuse – a case-by-case approach does not make for regulatory certainty.

[15] It is notable that one of the reasons given for the repeal is the FCC Chair’s belief that removing net neutrality restrictions (and thereby allowing carriers to decide what traffic to carry and how) will encourage network investments by those carriers: Ajit Pai  ‘Our job is to protect a free and open internet’ (op-ed piece by the FCC Chairman) CNet.com (online, June 10, 2018) < https://www.cnet.com/news/fcc-chairman-our-job-is-to-protect-a-free-and-open-internet/ > accessed on June 11 2018; the reversal was unsuccessfully challenged in court by 22 States.

ENTER YOUR NOMINATIONS: 40 Leading Nigerian Lawyers Under 40
HOW TO PLEAD INSANITY
What Nigeria's Public Sector needs