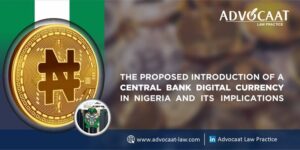 By a circular dated February 5th 2021, the Central Bank of Nigeria (CBN) directed all financial institutions to close bank accounts of persons or entities transacting in or operating cryptocurrency exchanges noting that facilitating payments for crypto currency exchange is prohibited in Nigeria. According to the CBN, the adoption of cryptocurrency in Nigeria will restrict the CBN’s ability to effectively perform its monetary policy and supervisory responsibilities. In addition, its use will largely undermine the CBN’s role in controlling money supply, posing risks such as loss of investments, money laundering, terrorism financing, illicit fund flows and criminal activities as cryptocurrencies are usually issued by unregulated and unlicensed entities.

Ironically, in what appears to be a policy turn around the CBN recently announced its plans to introduce a Central Bank Digital Currency (CBDC) before the end of 2021. In making the announcement the CBN stated that the introduction of the digital currency will supplement cash, enhance the financial inclusion drive of the CBN, reduce the cost of cash management and enable innovations in Nigeria’s financial market.

The major conflict between central banks and cryptocurrency is the decentralized nature of cryptocurrency, so CBDCs offer governments an opportunity to take the benefits of the new financial technology without necessarily giving up their regulatory powers or control. An important similarity between the CDBC and cryptocurrency is that they both adopt blockchain technology, however the major difference lies in the CBDC being regulated by the government through the Central Bank. 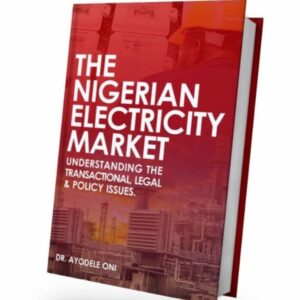 IMPLICATIONS OF THE INTRODUCTION OF CBDC

Retail CBDC systems will have broader impacts on the economy as non-bank participants will have direct interactions with Central Banks. This is in contrast to wholesale systems where only licensed institutions interact with the Central Bank.

As a new form of central bank money, CBDCs have the potential to affect central banks’ wider policy objectives, either by acting as a new monetary policy tool or through its effects on the portfolio choices of Individuals. Crucial to this is the flexibility provided by CBDC in responding to macroeconomic shock. [2]

HOW OTHER COUNTRIES ARE IMPLEMENTING CBDCs

CBDC systems vary significantly in their design and implementation based on the Central Bank and monetary policy of the currency system, but are largely aligned to either a wholesale or retail model.

Wholesale CBDCs are a digital evolution, enabled through distributed ledger technology of traditional reserves held at Central Banks by financial institutions. They are used only to transfer value between Central Banks and licensed participants with accounts at the Central Bank. Retail CBDCs bring the settlement and transparency advantages of distributed ledger technology to everyone. Individuals and businesses will be able to hold and interact with CBDCs independently of financial services institutions. [3]

The most prominent CBDC project being implemented at this time is China’s digital renminbi or Digital Currency/Electronic Payments (DCEP) initiative, The use of the CBDC was on trial in Q4 of 2020 and reports show that China is working towards a phased release. China embarked on the project in 2014 and has positioned its development as a direct challenge to the global dominance of the U.S. dollar. While details of the project are still emerging, reports suggest that DCEP will use Distributed Ledger Technology (DLT), and is intended to replace cash in circulation, and will be distributed through digital wallets.

As of 2020, The Central Bank of The Bahamas was preparing to launch the Sand Dollar, a digital version of its Bahamian dollar, which could potentially become the first active global CBDC . The Sand Dollar intends to make digital payment technologies more accessible to underserved communities. Users will be required to go through Know Your Customer (KYC) and Anti-Money Laundering (AML) compliance processes before transacting with the Sand Dollar.

The Marshall Islands plans to launch Marshallese Sovereign, a CBDC built on the Algorand blockchain whose purpose is to promote financial inclusion. Users will need to undergo verification processes before they can use the CBDC but the Marshallese government has emphasized that the CBDC will preserve users’ privacy.

The European Central Bank (ECB) has also explored releasing a CBDC, the digital euro, arguing that it could be a means to adapt to the continuing digitalization of the global economy. Likewise, the ECB has said that it may issue a CBDC if foreign CBDCs or “private digital payments” are widely adopted in Europe. It plans to consider whether it should initiate a CBDC project around mid-2021.

In addition to the aforementioned projects, South Korea, Japan, the United Kingdom, Canada, and a few other countries are also considering launching CBDCs. While the U.S. does not yet have plans to launch a CBDC, the Federal Reserve has said that it is exploring how it could digitize the dollar in the future.

The proposed introduction of a CBDC in Nigeria is a welcome development, however the government should take into consideration the peculiar economic realities in Nigeria such as Inflation, engage in thorough research, engage and receive input from all relevant stakeholders and develop the CDBC in way that it is a better alternative to the fiat currency.  It is also important to note that majority of the populace in Nigeria are not conversant with the use of technology. Therefore, in other to fully maximize the benefit of the CBDC there needs to be sensitization and education of the populace on how to use the CBDC and its benefits.

Some years ago, when ATMs were first introduced in Nigeria, it was met with great skepticism. However, save for the unbanked, nearly every Individual has an ATM card limiting cash handling.  It is safe to presume that the introduction of a CBDC will have the same response and effect.