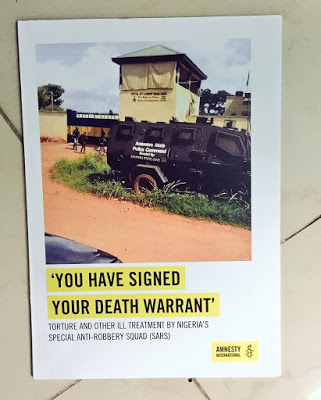 Over the past few months, there has been public
outcry against a unit of the Nigerian Police known as the “Special Anti – Robbery
Squad (SARS)”. With the hashtag #EndSars, many Nigerians have called for the
disbandment of the rogue unit within the police or in the alternative its
complete reform. Albeit, despite the national outcry of the atrocities committed
by these police officers, there seems to be no end to their reign of terror,
extortion and blackmail as on the contrary, they seem to have been emboldened
in their actions and social media is filled with daily reports of the inhuman
treatment metered to Nigerian citizens by these gun wielding extortionist.


According to Amnesty International, in its 2016 report on SARS, titled; Nigeria: You have signed your death warrant, former detainees told
Amnesty International they had been subjected to horrific torture methods,
including hanging, starvation, beatings, shootings and mock executions, at the
hands of corrupt officers from the feared Special Anti-Robbery Squad (SARS). 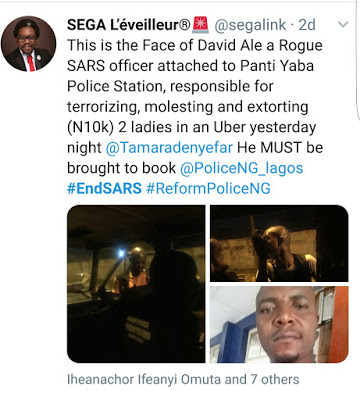 The following is an excerpt from Amnesty  –

“Our research has uncovered a pattern of
ruthless human rights violations where victims are arrested and tortured until
they either make a ‘confession’ or pay officers a bribe to be released.”Amnesty International has received reports
from lawyers, human rights defenders and journalists and collected testimonies
stating that some police officers in SARS regularly demand bribes, steal and
extort money from criminal suspects and their families. ‘SARS officers are getting rich through
their brutality. In Nigeria, it seems that torture is a lucrative business,”
said Damian Ugwu.

You may ask yourself if justice would ever
inhibit this land? Or if we have a government?  And you will not be wrong to let your heart
fall to the feeling of despair and frustration resulting from the discovery
that in a nation like ours, one must not look to the government to provide adequate
security, rather one must secure oneself with a high fence and tough vicious
dogs. But how do you protect yourself from the person who is constitutionally
vested with the authority to protect you? how can we be assured that our cries
would lead to the reforms we so desperately seek in the Police force. 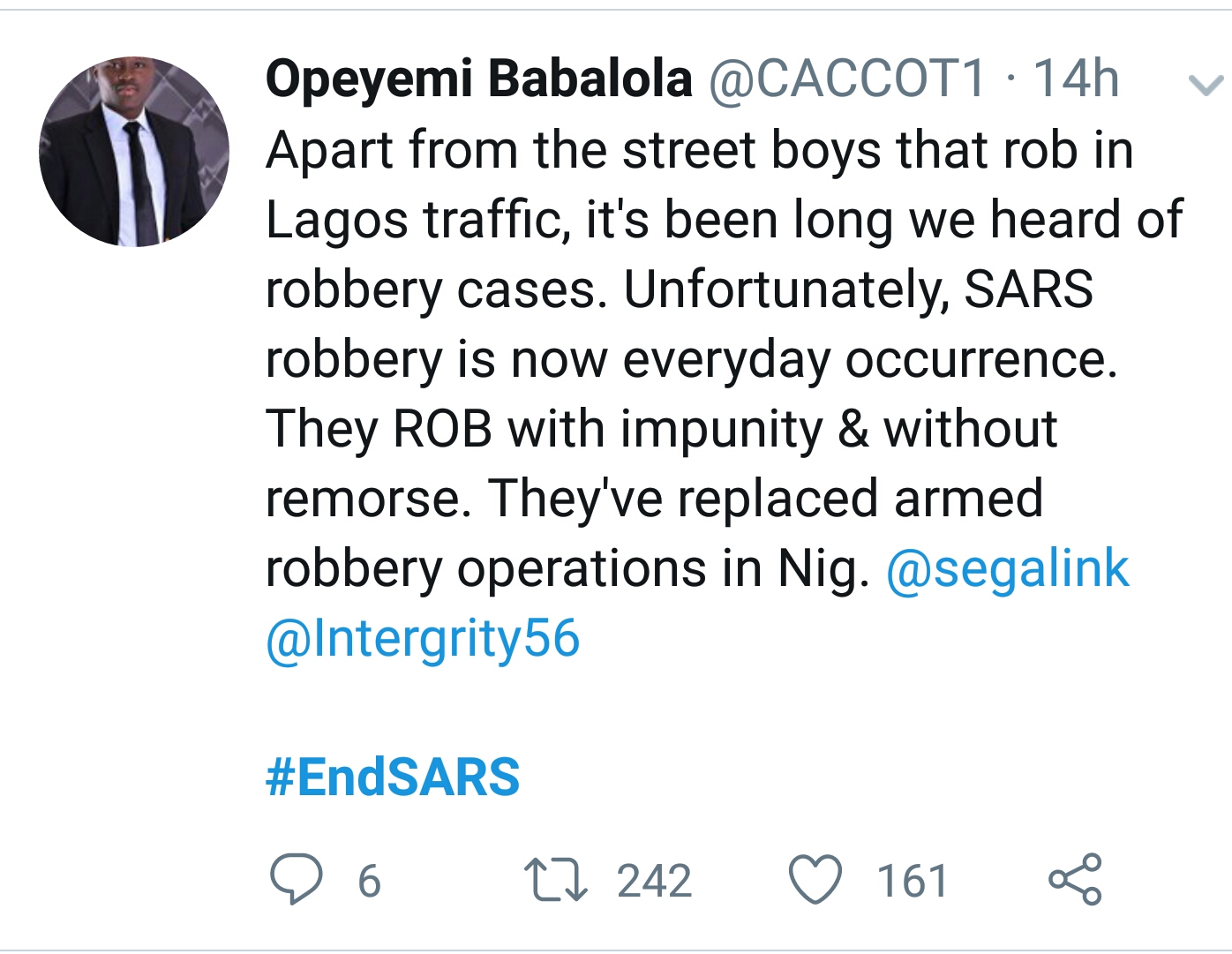 Is SARS ever going to change? The answer is “NO”
and below are the reasons why our cries have not changed anything till now.
1.
POLICE WELAFARE
The issue of police
welfare has been on the burner for many years and is a factor critically responsible
for the unlawful actions of the police. The Nigerian police is underfunded and
underequipped and most officers have been forced to use extortion as a means of
acquiring extra financial support for themselves and their families. In essence the need for better welfare packages for officers of the police force is of supreme importance.


The issues of poor remuneration and gear also raise their ugly heads. Every officer should have a bulletproof vest as a standard part of his uniform but we find our officers are sent into duty with minimum forms of body protection or armour.


The Police have stated that it would take an average budget of 1 Trillion Naira yearly for the Agency to leave up to its mandate, however with the current estimates of the Nigerian budget, the police alone would not be able to come close to such an amount in funding. A solution may however appear in the creation of State Police, an initiative the Nigerian Police has usually approached with caution due to the opportunity it would provide for State Governors to control the said state police for political gain, however, this must not be the reason why Nigerians should be denied the opportunity to give the creation of state police a try. Since the current Nigerian police will not be equipped to police the nation effectively within all territorial lines and also because community policing is now a globally accepted standard. 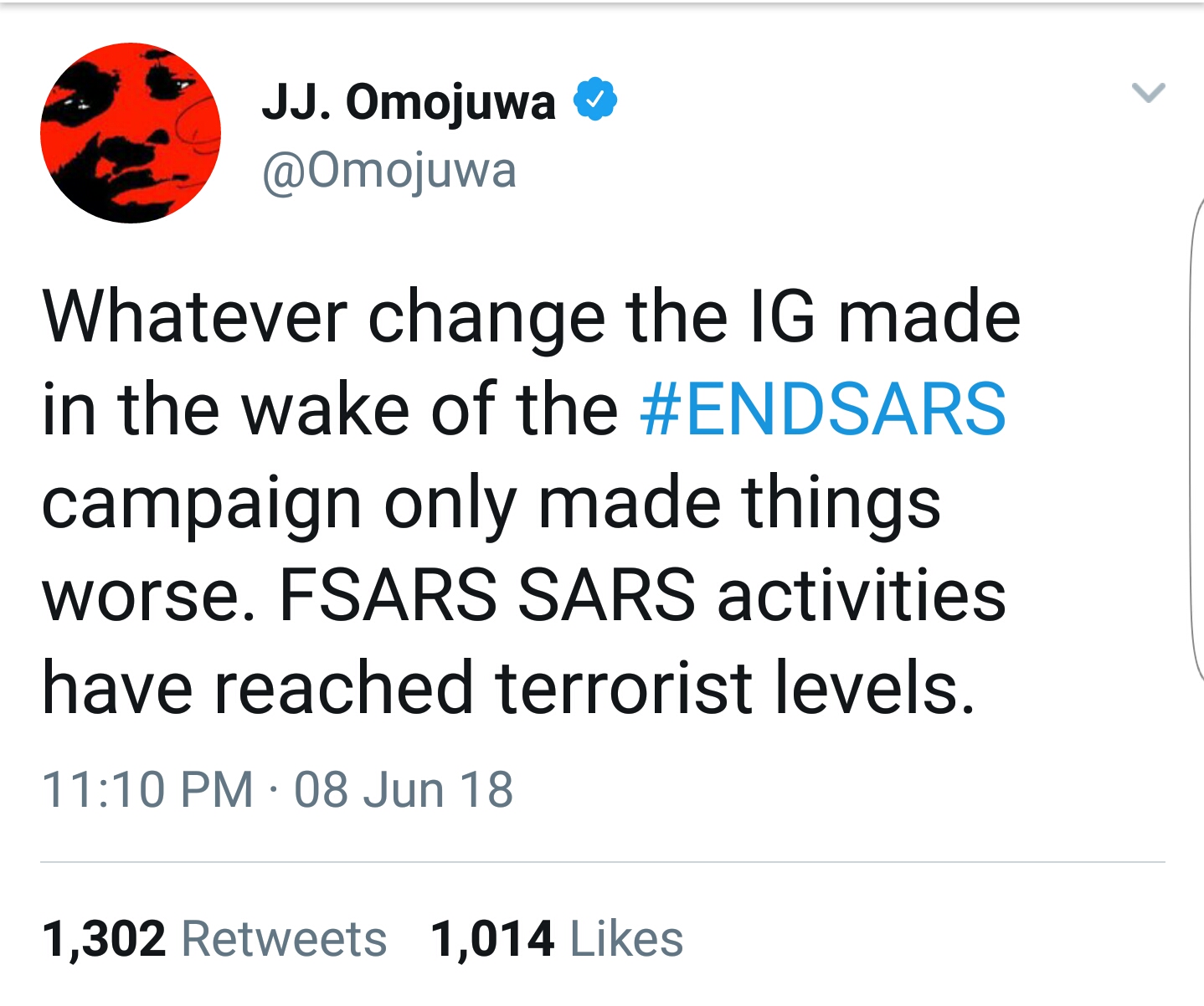 The system of the Nigerian
police is one that supports extortion and as long as the system is not
reformed, nothing will come of our cries. According to Wikipedia, there
are over 1300 police stations in Nigeria. Have you ever wondered how these
stations are funded? The DPO of a police station is expected to run the station
and usually this requires some finances. Does the Police Headquarters provide
these finance? NO.


It can then be assumed that Police Stations are meant to fund themselves and since the
police does not have any business, how are they supposed to carry out their
functions? You guess is as good as mine, they support the stations through
funds they get from the public and how do they get those funds? you may answer that question to the best of your knowledge. Moreso, like the branch of a business, it has been alleged severally
that each police station also has to forward financial returns up the chain,
this therefore allows the police to run like a profit making company and when
there are no goods to sell, how do they make profit?
3.
POLICE SUPERVISION
On social media and
on other forms of traditional media, the Police Complaints commission has
requested citizens who are unlawfully treated by Police officers to make
official complaints and reports, however, the police complaints commission is
not well equipped to come to the aid of every Nigerian and there have been queries
of unanswered and untreated complaints.


According to the Police Complaints website, in the first quarter of 2017, over 498 complaints were received by the unit, about over 355 were resolved and closed, while over 65 were false/unrelated. This number represents only a limited number of the acts of unlawful treatment that happen daily and it would be interesting to see recent numbers of complaint form the unit.

From reports, the acts of extortion are openly done at the police stations and is no secret between the
officers. They all know are deemed to know what is going on but are all unwilling to put an end to
it because it serves their purpose. It can be likened to the system of a racket that is
inbuilt into the system and as long as there is no mechanism to check these
human right violations at the police stations, there would be no reprieve to
the common Nigerian as the Police Complaints Unit cannot effectively cover all
1300 police stations within the country.

Truth is usually, the
DPO of every station and every other officer in the station is usually informed of the on-goings at the station and therefore it has become part and parcel of the system.
4.
POLITICAL WILL
The hard truth is
that in Nigeria, the political class are most concerned about themselves and
not the general populace. And it is only when it concerns them directly that
they seem to seem to swing to action. For instance, in Nigeria courts, trials
could take years to complete but election petitions are the only proceedings
that have a maximum timeline of 180 days. This timeline was put in the law by
politicians who were concerned about the security of their positions but they
have not thought well to introduce time limits to other court proceedings
because they believe it does not concern them as hardly do they fall victims of
these unholy acts of the police.
5.
THE LACUNA IN THE
CRIMINAL JUSTICE SYSTEM
When a citizen is
beaten and unlawfully arrested by SARS what are the instant remedies available to
such a person. Obviously one cannot make a call as your phones are seized and
crying for help is fruitless as one is usually beaten in the premises of the
police station while other officers turn a blind eye. Such citizen is then
asked to bail oneself after the police officers must have gone through the
phone with the aim of discovering the person’s account balance before they are
then allegedly lead to the bank ATMs to make cash withdrawals.
The only remedy
available to such person upon arrest is usually to be taken to court to prove
his innocence of the crime but that includes being charged to court, being
remanded by the Magistrate while bail is granted or denied and the requirement
of having to instruct a lawyer to defend one’s case in court. Usually these
only work in theory because most Nigerians rather than go before a judge who
has now become as hardened as the wooding bench would rather pay their way out
to secure their freedom.
6.
LACK OF PENALTY
Until the law says
that all police officers who collect bribes or act unlawfully will be removed
from the force, then no form of reforms will come to the police. When there is
no repercussion for the acts of extortion by the police it emboldens the
officers to continue in the unjust ways. One may ask Yomi Shogunle how many
officers have been dismissed after being found guilty of these acts, more often
they are given lesser penalties like a demotion or a transfer to another unit,
however, they are usually retained in the force to continue their acts of
bitterness towards citizens and only a few are either prosecuted or jailed.
The above stated factors are the problems
faced by Nigerians in the fight to reform the police and without the political
will to reform the police, Nigerians will continue to be victims of the police
and will always be oppressed by the institution whose duty is to protect them. So how can we turn our faith around and
demand a system that works? By doing the following –
1.     By making police and
especially SARS reforms a KPI for the current political administration. The
only time to get the attention of Nigerian politicians is in an election year
and as we move towards the 2019 elections, the current APC government should be
made to note that if they do not reform the police or disband SARS then there
would be no re-election for them. Trust me, this will work.
2.     By every Nigerian standing
up to challenge unlawful SARS officials anywhere they may be found.  If you see a SARS official around you, make a
recording of all their actions and put same out on social media, let them know
that they are being watched everywhere the go and the people will hold them
accountable.
3.     Sue the police. The
more people are able to enforce their legal rights and obtain judgment against the police for the unlawful acts
they commit, the more government attention will be brought to these despicable
acts.
The above may not be exhaustive in providing
solutions to the acts of human right violations by the police, if you have any way by which we can
promote and achieve police reforms, pls provide same in the comment section below and to end in the famous
words of Senator Dino Melaye “If you speak the truth, you die.
If you lie, you die. I, Dino Melaye has decided to speak
the truth and die”.
Most obliged.
Adedunmade Onibokun Esq.
dunmadeo@yahoo.com