BAIL; FREE OR NOT 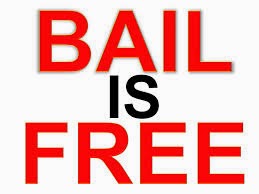 Many Nigerians do not understand the concept of bail, there have been questions about whether bail is free in police stations or whether it should be free. In some countries, offenders are required to post bail after submitting a form of security. In Nigeria, the police is empowered to grant bail for a reasonable sum,
the law however fails to state how much a reasonable sum is which leaves its interpretation very vague and relative. It should be noted that the intention of this article is only to share information and the services of a lawyer may be of importance if one happens to be in a situation where bail is required.
Bail is the temporary release of a person who has been arrested, charged to court or imprisoned, pending the conclusion of investigation or the determination of the case against him, or the determination of his appeal against conviction. There are 2 types of bail; police bail and court bail, thus bail can be granted by the Police or by the Courts.
In the Court the general rule is that anyone who is not arraigned for an offence punishable by death can be admitted to bail. The law provides that anyone arrested must be brought before a court of law within a reasonable time or the person should be released on bail. Reasonable time is defined as 24 hours after arrest where a court is situated within 40 kms from the Police station and 48 hours where the court is far away from the station. The process for applying for bail at the station is in writing, the person applying  shall produce a surety and the application shall include the passport photograph of the surety, if conditions are set for the bail,the suspect must satisfy the conditions before he is released. Bail is free in the police station however in reality this is far from the truth as some policemen demand payment for such bail applications even though the monies collected are never rendered to their superiors. 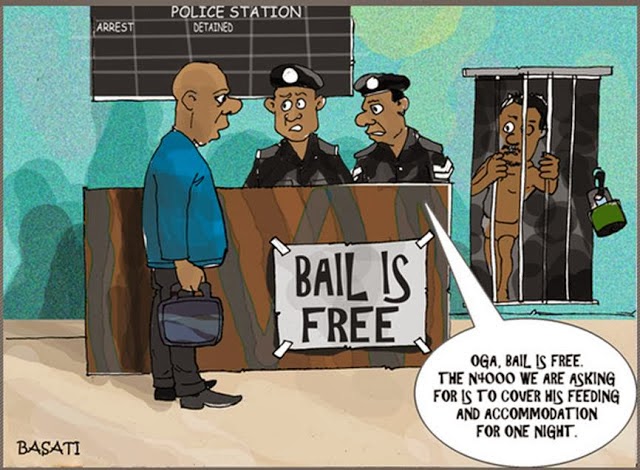 Section 27 of the Police Act also empower the Police to grant bail for a reasonable amount, this is contrary to popular knowledge that bail is free. It provides that

” when a person is arrested without a warrant, he shall be taken before a magistrate who has jurisdiction with respect to the offence with which he is charged or is empowered to deal with him under section 484 of the Criminal Procedure Act as soon as practicable after he is taken into custody:
Provided that any police officer for the time being in charge of a police station may inquire into the case and-
(a) except when the case appears to such officer to be of a serious nature, may release such person upon his entering into a recognisance, with or without sureties, for a reasonable amount to appear before a magistrate at the day, time and place mentioned in the recognisance; or

(b) if it appears to such officer that such inquiry cannot be completed forthwith, may release such person on his entering into a recognisance, with or without sureties for a reasonable amount, to appear at such police station and at such times as are named in the recognisance, unless he previously receives notice in writing from the superior police officer in charge of that police station that his attendance is not required, and any such bond may be enforced as if it were a recognisance conditional for the appearance of the said person before a magistrate.”
There is a current confusion with regard to the issue of bail as sometimes, the police have advertised that bail is free, however in reality, this may not be the case. As stated in the law, it depends on the police officer in charge to determine if bail will be granted and its also at his discretion to determine the amount at which bail is to be granted. This aspect of the Police Act really  needs amendment in other to remove the vagueness of the law.