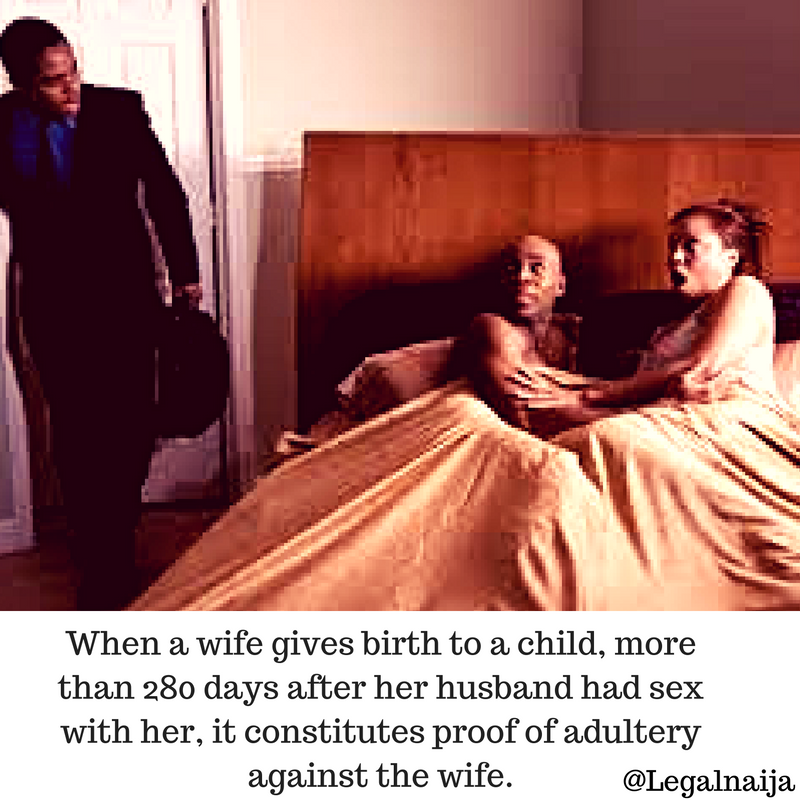 What to prove to get a divorce in Nigeria | Adedunmade Onibokun

Official statistics from
the National Bureau of Statistics suggest that divorce is exceedingly uncommon
in Nigeria with just 0.2% of men and 0.3% of women having legally untied the
knot and well under 1% of couples admit to being separated. But as a Legal practitioner,
I seek not to agree with this statistic especially as I witness many divorce
proceedings in family courts and the newspapers are regularly awash with
reports of petitions for dissolution for marriages.

Moreover, it has been
argued in several quarters that the above statistics do not put into
consideration the number of marriages conducted under traditional law and also Islamic
law.

Under Nigerian law, a statutory
marriage can only be dissolved by a court order and divorce is guided by the
Matrimonial Causes Act. It is also worthy to note that under Nigerian law, marriage
is between a man and a woman, as Nigerian law does not recognize same sex marriages
or unions. The law also further provides a 14 year jail term, for anyone who participates
in same – sex unions or relationships.

With regard to petitions
for dissolution of marriage, Section 15(1) of the Matrimonial Causes Act provides
that, a petition may be presented to the court by either party to the marriage upon
the ground that the marriage has broken down irretrievably.

Submitting a petition for
dissolution of marriage does not however automatically mean that the divorce
will be granted, as the petitioner must be able to prove sufficient grounds to
warrant the prayer being granted. If the petitioner fails to prove this, even
if the divorce is desired by both parties, the petition will be dismissed.

The grounds that a petitioner
must prove to show that the marriage has broken down irretrievably are stated
in Section 15(2) of the Matrimonial Causes Act, they include –

The dissolution of
traditional or customary marriage is however not as stringent as that under the
marriage act. A customary law marriage can be dissolved without judicial
pronouncement or intervention.

For more information about
how to get a divorce, you can talk to a lawyer or send a mail to the
undersigned. 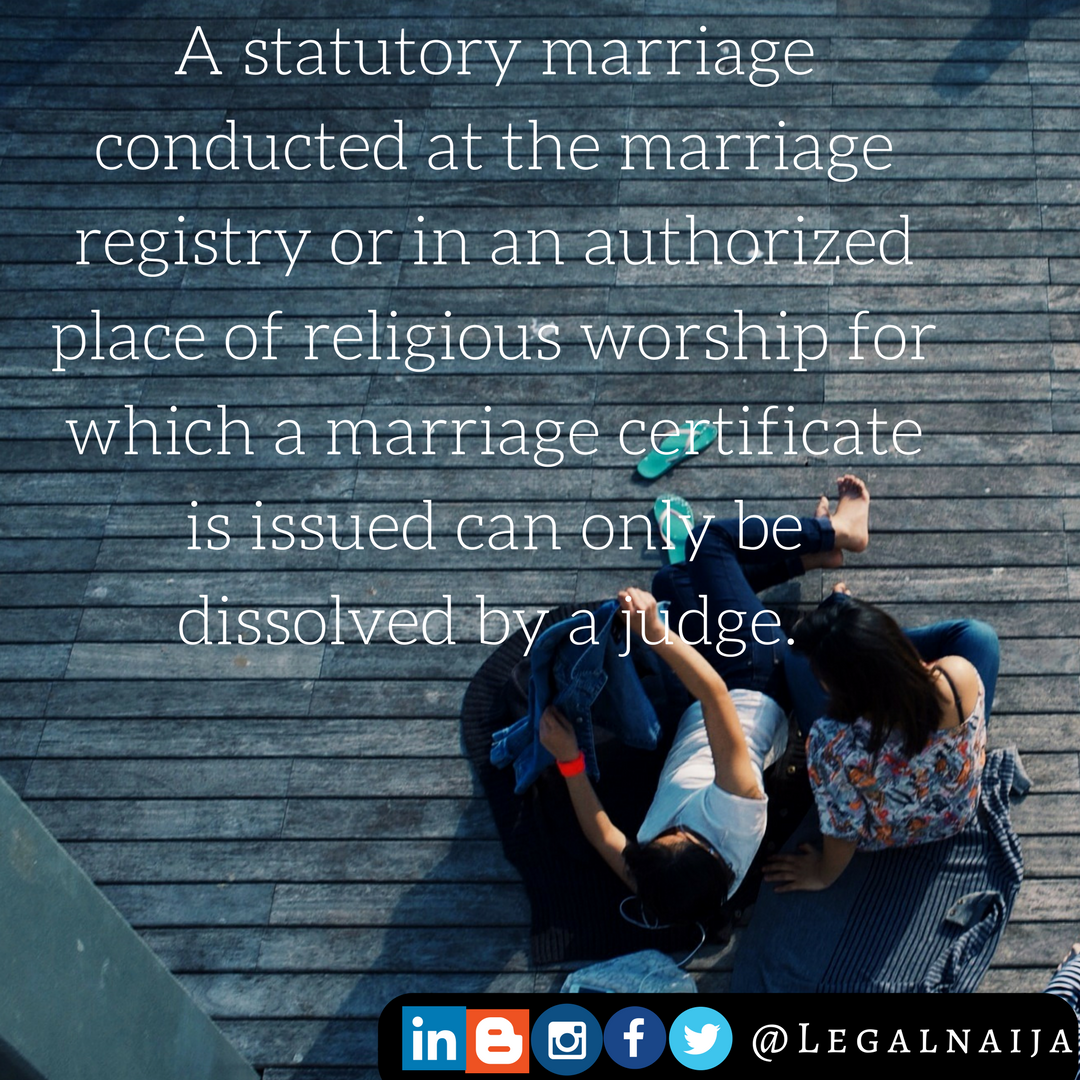 The breakdown of a marriage is undoubtedly
a painful and life-changing event. But what could be more painful than finding
out that you are still married even though you are supposed to have been
divorced years ago?
I was instructed recently by Mrs. A to
claim maintenance for the child of her marriage to Mr. A who she had been
‘divorced’ from over three years before. According to her, Mr. A has been
inconsistent with the maintenance payments. My first response was to ask for a
copy of the order of court dissolving the marriage to have an idea of the
arrangements made by the judge for the welfare of the child post-dissolution.
What I saw next shocked me to the marrow.
I saw a supposed order for ‘nullification’
of marriage which purportedly dissolved the marriage summarily without a trial
and nullified the marriage from the day of celebration. For added measure, the
marriage was supposedly dissolved on the ground of ‘incompatibility’ between
the parties to the marriage which by the way lasted only two months. I was
convinced that the order was suspicious and required further investigation. A
few visits to the High Court registry confirmed my worst fear: This was a fake
order. It was not granted by any court but by one of the growing army of fake
divorce mercenaries What I found is a criminal racket that permeates the
marriage and High Court registries orchestrated by State officials and urchins
preying on the victims some of whom are willing and others unsuspecting,
looking for quick fixes to their marital woes and others needing it for more
criminal purposes – for emigration and other unspeakable frauds. Suffice to say
that we are taking action against the participants in this criminal enterprise
in the case of Mrs. A.
This got me thinking: how many people are
going around believing they are divorced when they are actually still married.
Mrs. A completely believed she was divorced and was in a relationship which
could have led to marriage (she would inadvertently have committed bigamy and
her ‘new’ husband would have been committing adultery with a married woman)
before this bombshell. She would not believe me until I produced the letter
from the court registry disclaiming the order. I then realized that citizens
need more education about how the marriage dissolution process works and
decided to pen down a few pointers to how the process works.
1.
A
statutory marriage conducted at the marriage registry or in an authorized place
of religious worship for which a marriage certificate is issued can only be
dissolved by a judge after hearing the parties on the factors which led to the
breakdown of the marriage. If you are given a ‘divorce order’ without having to
appear in court, that my friend is a fake divorce.
2.
Proceedings
for dissolution of a marriage is not complete until arrangements are made for
the welfare of the children of the marriage if any and other financial
provisions such as maintenance for the party entitled to it, settlement of
property, e.t.c.
3.
The
court is mandated to attempt reconciliation of the parties. This will happen at
different stages of the process. Before your lawyer files the suit, he is
expected to file a certificate confirming that he has advised his client on the
possibilities of reconciliation. During the proceedings, there is a compulsory
conference (meeting) which parties must have to explore settlement. After the
trial, there is also a three – month window within which the parties may
reconcile before the dissolution becomes absolute. Certainly, dissolution of a
marriage is not a tea party.
4.
Dissolution
of a marriage is not conducted at the marriage registry or the court registry.
It is done before a High Court Judge in the case of a statutory marriage or
before the judges of a Customary Court for customary law marriages. In the case
of Mrs. A, she fell into the hands of a fraudulent person at the registry who
she called for advice and was told the marriage could be ‘nullified’ at the
registry since the marriage was still within a year of celebration!
5.
Many people fall into this trap of fake
divorces due to privacy concerns. They are more than willing to adopt any
measure that does not involve them appearing in court to ‘wash their dirty
linens in public’. While a court appearance may be unavoidable, it is important
to know the best approach to achieving a dissolution without the sordid details
of the marriage. Parties can exploit the no-fault option of seeking dissolution
on the ground of living apart for 2-3 years before presenting the petition for
dissolution if their case falls under this head. In this way, nobody needs to
prove the fault of the other party and the court would dissolve the marriage without
an inquiry into this.
If you suspect you may have fallen into
this trap of fake divorces, my advice to you is to visit the High Court
registry to verify the order you have been given. If you find out that you are
‘divorced but still married’ then you will need to go through the process
outlined above all over again. I share your pain.
Jamiu Akolade Esq
T: @akoladejay
E: akoladejamo@yahoo.com
Lagos Nigeria.
Source 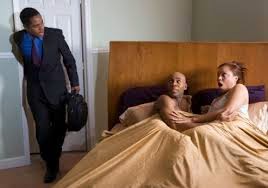 HOW TO PROVE YOUR PARTNER COMMITTED ADULTERY IN COURT

Adultery is sexual intercourse between two persons of whom
one or both are married but not married to each other. Being able to prove
adultery is quite a difficult task especially if you have to show that there
was in fact sexual intercourse involved. Only an admission of the act or evidence
depicting the actual act is 100% proof of adultery because to prove adultery,
one must show that there was penetration of the male organ into the woman.  The courts are aware of this fact, thus in
proving the existence of adultery; the courts will rely on indirect or
circumstantial evidence. The following are ways of proving adultery, though some
are circumstantial, others are more definite:-
Adultery must be voluntary, thus a married woman who is raped
cannot be guilty of adultery by virtue of that act.
Adedunmade Onibokun
@adedunmade
dunmadeo@yahoo.com