NBA 2018 PRESIDENTIAL ELECTION- MY FINAL CHOICE IS PAUL USORO, ESQ.,SAN – HE IS THE BEST OF ALL THE 3(THREE) CONTESTANTS 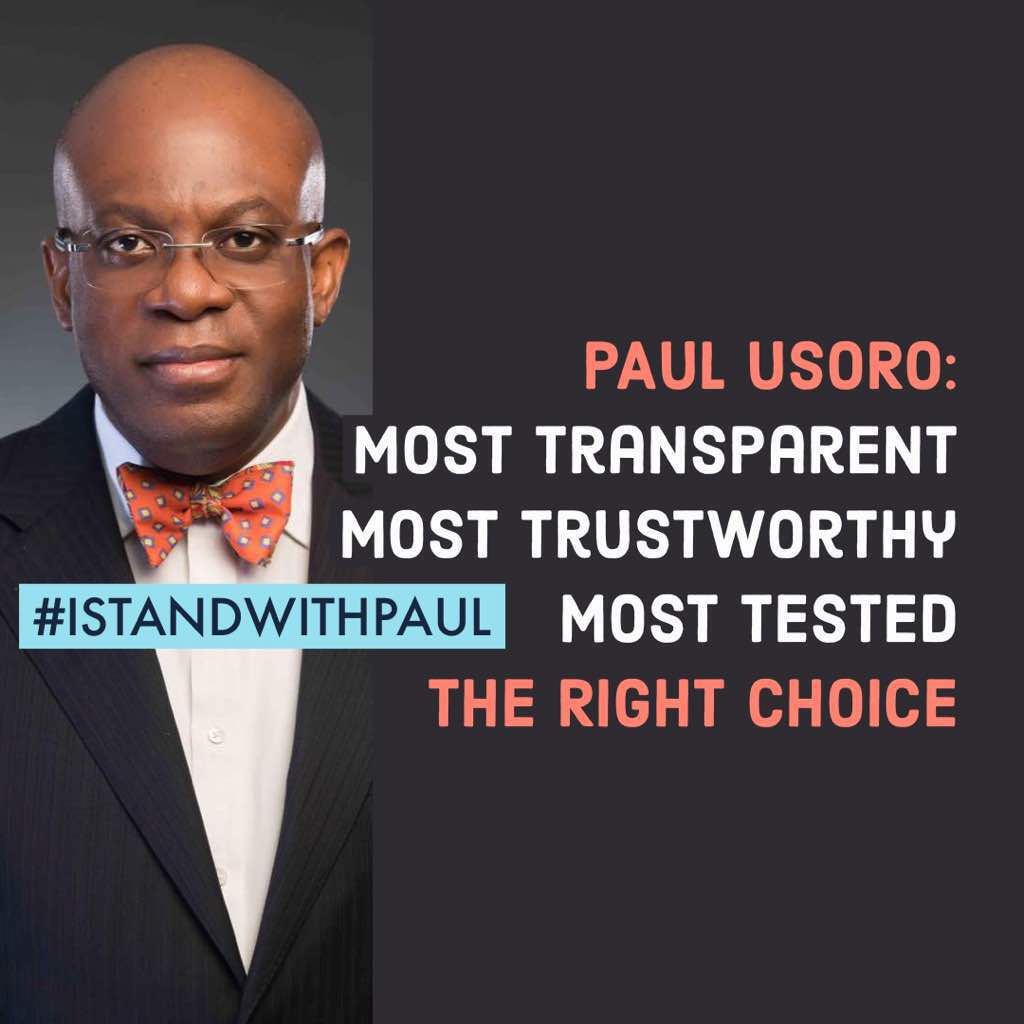 Distinguished learned members of the inner and the outer Bar, I pay my tributes to you all and most especially our always unjustly […] and impoverished young lawyers who are ironically in the majority but left with meagre resources, briefs and insulting wages.

I beg all of you both the Seniors and the Young lawyers in the spirit of brotherly camaraderie  existing among us as learned friends to please VOTE for PAUL USORO SAN as the next NBA President.
I have examined critically all the 3(three ) remaining contestants and I have empirically come to the a firm and resolute conclusion that Paul Usoro Esq,SAN is the best and primus inter pares among the remaining 3 candidates since the unjustifiable and arbitrary disqualification of my original candidate, Mazi Afam Osigwe Esq.

I am happy that when Mazi Afam Osigwe called me on phone on Monday this week , he told me and I verily believe him that HE HAS INSTRUCTED ALL HIS SUPPORTERS TO VOTE EN MASS FOR PAUL USORO ESQ., SAN , but he said that is without prejudice to his pending litigation in court over his disqualification.
WHY ? PAUL USORO ESQ., SAN IS THE BEST AND SHOULD BE VOTED FOR AS THE BAR PRESIDENT

We cannot afford to entrust the NBA to any of the aspirants without tangible visible presence both locally and internationally in terms of professional exposure.

I am a private legal practitioner with bias for civil litigations like Paul Usoro SAN and  Arthur Obi Okafor SAN. I have traversed and criss-crossed the 36 states of Nigeria in the course of legal practice pursuits since I started Advocacy under Chief Bayo Aluko-Olokun SAN (of blessed memory) in Kaduna in 1993/1994, the city where I met Masuuud Alabelewe Esq., also a Corp member with Gbenga Atoki Esq. I later joined Dele Akinmusuti Esq from 1994 till 1998 for the best mix of Solicitors & Advocacy practices. In the law firm which was the most organised and structured law firm in Ibadan after the law firm of S.P
A.Ajibade & Co. and Akin Delano & Co., where I was the Practice Manager from February 1995 to September 1998. I left the firm to join the foremost and most successful Partnership law firm in Nigeria, Olujinmi & Akeredolu in October 1998 and I was with the chambers till April 2002 when I was sacked by Chief Akin Olujinmi, SAN for an alleged rudeness unbecoming of a legal practitioner.
Kazeem Gbadamosi Esq. (KGB) and my humble self teamed up to establish Adebayo & Gbadamosi, Legal Practitioners in October 2002 and we fashioned the law firm after Olujinmi & Akeredolu.
Lest I bore you with all the above mentioned details, the point that I am trying to make is that i have been a very active legal practitioner since I was called to the Nigerian Bar in 1993 till date and also that I have been a very active Bar Man since NBA was brought to live again in  1999. I make bold to say that I have never heard of Arthur Obi-Okafor SAN and I have never met him throughout my progessional voyages all over the country.
The first time ever i heard about him was in 2017 through my very good friend and soul mate , Emeka Obegolu Esq who asked me to support Artur Obi Okafor SAN for the NBA President.

I know Prof. Ojukwu very well as an erudite law teacher at the Nigerian Law School, a sound and excellent Resource person and astute trainer at NBA conferences, workshops, sections, fora and seminars. Also, he once headed or was one of the leaders of the Eastern Bar Forum which he has now despised and condemned during the ongoing Bar politicking. But, nobody can deny the fact that Professor Ernest Ojukwu SAN is a consummate Bar Man.
I have known Paul Usoro SAN since 1998 when I joined Olujinmi & Akeredolu as I used to follow Arakunrin Oluwarotimi Akeredolu SAN (Aketi) who is the incumbent Gov of Ondo State to “Paulo”s (as Aketi used to call Paul Usoro Esq,SAN) law office at NIDB Building office on several occasions between 1998 and 2012.
Paulo’s law office at that time was well structured, neat, organised, fully computerised with a functioning website and full internet access that always taunted the legendary Aketi on when the Olujinmi & Akeredolu would rise up to be like his friend’s law firm. Aketi would only retort and dismiss me then with ” Oj , O serious. May be you dont know that Paulo was both a typist and a stenographer before he read law.”
And I would reply him jokingly too that “Just exactly like your Partner”Let me state at this juncture that Aketi is best among Nigerian Senior Legal Practitioners as he will always and at all times relate with any lawyer as an equal colleague and a friend. The Principal/ Junior relationship is alien and unknown to the legendary Aketi. I have been told by Samuel Onwukwe Esq. who had his national youth service with us that Paul Usoro Esq is also in the mould of Aketi in terms of that robust and excellent relationship with younger colleagues in chambers. To the glory of God,  I relate with my colleagues in chambers in the same manner which I learnt from the duo of Aketi & Paulo. Let me digress and even talk briefly about Mrs Mfon Usoro who is an even more active Bar person than Paul Usoro’s SAN. She is very prominent and left her indelible footprint on the sand of time of NBA and SBL in particular when SBL was evolving. She left as DG NIMASA gracefully when she refused to compromise her stoic corporate governance principles.  Only very few Nigerians can do such.
In terms of active Bar experience, Paul Usoro Esq, SAN has the best bar experience over and above the other 2(two) candidates. Similarly, the law firm Paul Usoro & Co. has over the years being one of the Platinum Sponsors of the NBA conferences and programmes just like Wole Olanipekun & Co.,  Banwo & Ighodalo, Olaniwun Ajayi & Co., Aluko & Oyebode, AELEX, Ajumogobia & Okeke to mention some of those top flying firms who at every conference, seminar, section and forum always sponsored NBA function while some Bar Officers are always waiting in the wings to spend some and pocket most of those donor funds.The law firms of Arthur Obi Okafor SAN and Prof.  Ernest Ojukwu SAN both combined together cannot match a quarter of the funds donated by Paul Usoro & Co. to the NBA over the years.
I am confident that one of the nemesis of the NBA is that those who contribute little or nothing to the Bar in terms of sponsoring of the Bar programmes are in most cases the parasitic beneficiaries of the Bar as they see Bar Offices as an avenue to enrich themselves.  Such instances are more common and worst among the occupiers of the office of the  General Secretary of the Bar in the last 10 years till date. My great Egbon and reverred Silk, Aare Olumuyiwa Akinboro, SAN is an exception to this general rule as it is on record that that he never engaged in corrupt and fraudulent  practices, maladmistration and abuse of office powers when he was the NBA GS. He discharged the functions of that office creditably.Also, in terms of international exposure, Paul Usoro SAN towers far ahead of the other 2 candidates and that sacred fact cannot be controverted. It was even alleged and being rumoured that a  candidate for a particular Bar office totally lacks exposure to the extent that the personality has never travelled out of the shore of this country and yet he is aspiring to be an officer of the Bar in this IT age.Again, Paul Usoro SAN is the only detribalised Nigerian among the 3 contestants . Though an Akwa- Ibomite , he lives all his life in Lagos and the South-West , he schooled in the South-West and has the headquarters of his top notch law firms in Lagos since he was called to the Bar.Also, he is ITC savvy which has placed him in the vantage position of being fully ready and prepared to take our Bar to the standardlevel of the International Bar Association.Finally, all the powers that be within the Bar are opposed to his candidature simply because they believe and are of the firm that he is too independent  and would therefore be uncontrollable and cannot be tossed arround as they like.Let us free and liberate the Bar from the Cabals that had held the Bar by her jugular to ransome by Voting massively for Paul Usoro Esq., SAN for a PUrified Bar.
The dawn of a new era in the Nigerian Bar is here, please VOTE for Paul Usoro Esq, SAN as the NBA President.
I am #PU-rified . I stand with Paul Usoro SAN.DATED this 16th August, 2018 at Liverpool, United Kingdom.
Mutalubi Ojo Adebayo Esq,Immediate Past Hon Attorney-General of Oyo State of Nigeria.

DO NOT ENTER: TRESPASS TO LAND
What Makes An Outstanding Corporate Lawyer? We Have Five Answers
Evicting tenants through self-help