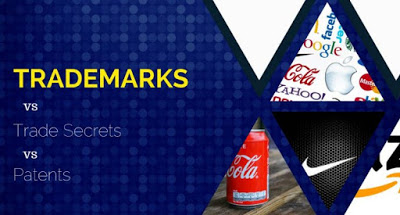 Conclusion
This
three-part article has considered different intellectual property rights. In a
nutshell, we can highlight the following differences that exist among trade
secrets, trademarks and patents:
1)           Trade
secret has the advantage of not being limited in time. Patents last for 20
years and trademarks last for 7 years although they are subject to renewal. A
trade secret may therefore last indefinitely as long as it is not revealed to
the public.
2)           Trade
secrets do not need to be registered and they take immediate effect. Generally,
trademarks and patents must be registered before they can enjoy protection.
3)           Trademarks
and patents are territorial rights and so must be registered in each country
where they will be used. A trade secret is not limited by territories and
guarantees protection anywhere it is used.
4)          A
trade secret is more difficult to enforce than a patent or trademark.
5)           The
moment a trade secret is made public, anyone may have access to it and use it
at will. Patents and trademarks do not face the same disadvantage as they ought
to be disclosed to the public.
6)          A
trade secret may be registered as a patent by someone else who has access to
similar information.
7)          Trademarks
protects the mark that is used to identify a product. Patents protect the invention.
Trade secrets protect the confidential information.
I
hope this has been enlightening.
[1]Pepsi Alerted Coca-Cola to Stolen-Coke-Secrets Offer (Fox
News July 06,
2006)
[2]https://sites.mediaserver.com/mmc_m/instances/sigw4yo7/items/z3i7rq3o/assets/srvq5grd/0/Yum_2013_NY_Investors_Conference.pdf
[3]McDonald’s secret Big Mac sauce recipe allegedly leaked
online
http://www.foxnews.com/fooddrink/2017/08/25/mcdonalds-secret-big-mac-sauce-recipe-allegedly-leaked-online.html
[4] Hanson, by Mark J.; Thompson,
Joe R.; Dahlgren, Joel J. “Overview of Confidentiality Agreements”. Iowa
State University Extension and Outreach.