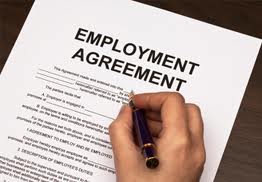 There
are a lot of people reading this post, answering “No” to the above question.
Next is thinking asking why you don’t have one in the first place and wondering
if you are even entitled to one?
Personally,
I have met workers who informed me that though they were engaged in various
forms of employments, they did not have written Contracts of Employment neither
had they been provided one by their employers.
If
you work in Nigeria and most likely any part of the World. Employers are always
required to provide a contract of employment to their workers. Also by virtue
of the Labour Act, every employer should provide a worker with a copy of the
Contract of employment not later than 3 months after the worker has commenced employment.
The law states in Section 7, that –
7. (1) Not later than three months
after the beginning of a worker’s period of employment with an employer, the
employer shall give to the worker a written statement specifying-
(a)
the name of the employer or group of employers, and where appropriate, of the
undertaking by which the worker is employed;
(b)
the name and address of the worker and the place and date of his engagement;
(c)
the nature of the employment;
(d)
if the contract is for a fixed term, the date when the contract expires;
(e)
the appropriate period of notice to be given by the party wishing to terminate
the contract, due regard being had to section 11 of this Act;
(f)
the rates of wages and method of calculation thereof and the manner and
periodicity of payment of wages;
(g)
any terms and conditions relating to-
(i)
hours of work, or
(ii)
holidays and holiday pay, or
(iii)
incapacity for work due to sickness or injury, including any provisions for
sick pay; and
(h)
any special conditions of the contract.
Furthermore,
Subsection (2) states that if after the date to which the said statement
relates there is a change in the terms to be included or referred to in the
statement the employer shall, not more than one month after the change, inform
the worker of the nature of the change by a written statement; if he does not
leave a copy of the statement with the worker, shall preserve the statement and
ensure that the worker has reasonable opportunities of reading it in the course
of his employment, or that it is made reasonably accessible to the worker in
some other way.
From the above, it’s
essential that workers are provided with copies of their Contracts of
employment according to the provisions of the law. By virtue of Section 21 of
the Act, any employer who breaches the above mentioned law is guilty of an
offence and liable to payment of a fine.
Dunmade Onibokun
Adedunmade Onibokun &
Co.
www.adedunmadeonibokun.com
Photo Credit – www.constituitionproject.ie