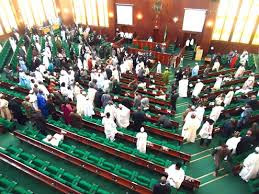 The Nigerian House of Representatives on 27th
July, 2017, in a plenary session, with 97 Senators in attendance, deliberated
over Bills seeking to amend the 1999 Constitution of the Federal Republic. The
Clauses include;
1.     Bill on Members of
the Council of States
Bill on the
composition of members of the council of state
Yes – 274 No – 6
Abstain – 2
2.     Authorization of
expenditure (Section 62 and 182)
Bill to reduce the
period of which the Governor of a State may withdraw funds from the
consolidated revenue funds in the absence of an appropriation act from 6 months
to 3 months.
Yes: 295 No: 0
Abstain: 0
3.     Devolution of Power

Bill to amend 2nd
schedule, part 1 and 2 of the 1999 Constitution to give more legislative powers
to state by moving some items to the Concurrent List in the Constitution.
Yes: 210 No: 71
Abstain: 8
4.     Financial Autonomy
of State Legislature
Bill to provide for
funding of Houses of Assemblies directly from the consolidated revenue of the
State.
Yes: 286 No: 10
Abstain: 1
5.     Distributable
account for LG’s to have their own special account
Bill to alter
Section 162 to empower each local council to maintain its own accounts into
which all allocations due to the local government council shall be paid
directly from the federation account and state allocations.
Yes: 281 No: 12 Abstain:
1
6.     Democratic
Existence funding and tenure of LG council
Bill aims at
strengthening local government administration in Nigeria by guaranteeing the
democratic existence and funding of local government councils.
Yes: 285 No: 7
Abstain: 1
7.     State creation and
boundary adjustment
Bill seeks to
ensure that only democratically created local government councils can
participate in state creation and boundary adjustments.
Yes: 166 No: 125
Abstain: 3
8.     Immunity for
legislators for Acts in Course of Duty
This is a Bill to
alter section 4, 51, 61, 68,93 and 109 of the constitution, to provide immunity
for members of legislature in respect of words spoken or written in plenary.
This means that no member of the Senate can be legally prosecuted for words and
writings made during a plenary session or in committee. And to institutionalize
legislative bureaucracy in the constitution and obligate the president to
address the joint national assembly once a year to give a state of the nation
address.
Yes:
288 No: 10 Abstain: 1
9.     Political Parties
and Electoral Matters: Time to conduct Bye Elections and Power to deregister
parties.
Bill seeks to alter
Section 134 and 179 of the Constitution to provide time for INEC to conduct bye
elections and Section 225 to empower INEC to deregister political parties for
non-fulfillment of certain conditions such as a breach of registration requirements
and for not winning any seat in any election.
Yes: 293 No: 2
Abstain: 1
10.    Presidential
Assent
This Bill seeks to
alter Section 58, 59 and 100 of the Constitution to resolve the impasse when a
President or Government fails to give or withdraw accent from a Bill passed by
the Legislature.
Yes: 248 No: 28
Abstain: 4 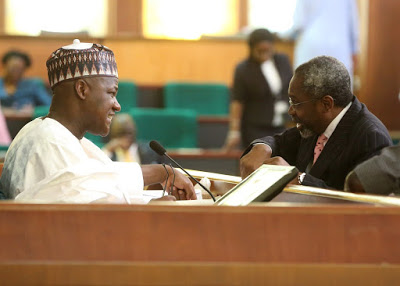 Nomination shall be
between 30 days after President has taken oath of office.
Yes: 248 No: 46
Abstain: 1
12. The Bill seeks to alter section 147 of the
Constitution of the Federal Republic of Nigeria, 1999 to provide for the
appointment of a Minister from the FCT, Abuja to ensure that the FCT is
represented in the Executive Council of the Federation.
Yes: 191 No: 91 Abstain: 3
13. Change
of names of some LG councils: Ebonyi, Oyo, Ogun, Pleateau and Rivers.
This Bill seeks to alter the Constitution to provide for change in the
names of some Local Government Councils and the definition of the boundary of
the FCT, Abuja.
Yes: 220 No: 57
Abstain: 8

14.   Independent
Candidacy
This seeks to alter sections 65, 106, 131, and 177 of the Constitution.
This is aimed at expanding the political space and broadening the options for
the electorate by allowing for independent candidacy in all elections.
Yes: 275 No: 14
Abstain: 1
15.    The
Nigeria Police Force to become Nigerian Police
This Bill seeks to alter the Constitution in sections 34, 35, 39, 214,
215, 216 and the Third Schedule to change the name of the Police from “Nigeria
Police Force” to “Nigeria Police” in order to reflect their core mandate.
Yes: 280 No: 9
Abstain: 4

16.  Restriction
of the tenure of President and Governor
The Bill sought
that any vice president who had completed a tenure of a sitting president and
contested a fresh four years mandate shall not be eligible to run for a second
term of office.
Yes: 292 No: 3
Abstain: 3
17.    Separation
of Office of the Accountant-General
This Bill seeks to alter section 84 of the Constitution to establish
the office of the Accountant-General of the Federal Government separate from
office of the Accountant-General of the Federation.
Yes: 274 No: 23
Abstain:2
18. Office
of Auditor General to be included in first line chat of consolidated revenue.
This Bill seeks to make the office of the Auditor-General for the
Federation and for the State financially independent by placing them on
first-line charges in the Consolidated Revenue funds of the Federation and of
the States.
Yes: 289 No: 11
19.Separation
of Office of the Attorney General from the Minister/Commissioner of Justice
This Bill seeks to alter sections 150, 174, 195, 211, 318 and the Third
Schedule to the Constitution to separate the office of the Minister or
Commissioner for Justice from that of the Attorney-General of the Federation
and of states soas to create an independent office of the Attorney-General of
the Federation insulated from partisanship. It also seeks to redefine the role
of the Attorney-General, provide a fixed tenure, provide the age and
qualification for appointment and also for a more stringent process for the
removal of the Attorney General.
Yes: 234 No: 58
Abstain: 3
20.    Submissions
from the Judiciary
This bill contains a vast array of alterations with regards to the
Judiciary such as the composition of the National Judicial Council, and
empowering Justices of the Supreme Court and Court of Appeal to hear certain
applications in chambers thereby enhancing the speedy dispensation of justice.
Yes: 265 No: 6
Abstain: 7
21.  Determination
of pre-election matters.
This Bill seeks to among other things make provisions for timelines for
the determination of pre-election disputes.
Yes: 288 No: 3
Abstain: 1
22.   Consequential
Amendment on Civil Defence
This Bill seeks to reflect the establishment and core functions of the
Nigeria Security and Civil Defence Corps. It is a consequential amendment
because of the inclusion of the national security and civil defence as an item
in the Exclusive Legislative List under the Second Schedule to the
Constitution.
Yes: 293 No: 2
Abstain: 1
23.     Citizenship
and indigeneship
This Bills seeks to alter section 25 of the Constitution to guarantee a
married woman’s right to choosing either her indigeneship by birth or by
marriage for the purposes of appointment or election.
Yes: 208 No: 78
Abstain: 2
24. Procedure
for Overriding Presidential Veto in Constitutional Alteration
This Bill seeks to among other things provide the procedure for passing
a Constitution Alteration Bill where the President withholds assent.
Yes: 271 No: 20
Abstain: 0
25.Removal
of law making power from Executive Arm.
This Bill seeks to alter section 315 of the Constitution of the Federal
Republic of Nigeria, 1999 to remove the law-making powers of the Executive Arm
of Government.
Yes: 139 No: 148
Abstain: 4
26.  Investment
and Securities Tribunal
This bill seeks to establish the Investments and Securities Tribunal
under the Constitution.
Yes: 270 No: 12
Abstain: 2
27.   Reduction
of Age for Election
This Bill seeks to alter the Sections 65, 106, 131, 177 of the
Constitution to reduce the age qualification for the offices of the President
and Governor and membership of the Senate, House of Representatives, and the
State Houses of Assembly.
Yes: 261 No: 23
Abstain: 2
28.Authorization
of expenditure time frame for laying Appropriation bill, Passage etc
This Bill seeks to provide for the time within which the President or
Governor shall lay the Appropriation Bill before the National Assembly or House
of Assembly to encourage the early presentation and passage of Appropriation
Bills.
Yes: 252 No: 7
Abstain:2
29.  Deletion
of State Electoral Commission from
CFRN
Yes: 229 No: 51
Abstain: 1
30. Inclusion
of Section 141 of the Electoral Act in the Constitution.
Yes: 241 No: 16
Abstain: 1
In total, there were 33 proposed
amendments, 30 were adopted and 3 were rejected. 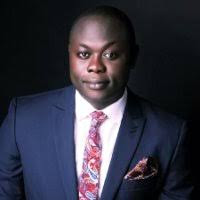