Compensation for death in the workplace 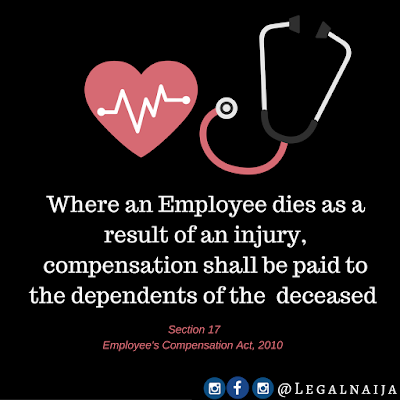 A fatal accident at work is defined as an accident
which leads to the death of a victim. Death is usually a tragic event,
especially when it occurs in the workplace. According to the International
Labour Organisation, ILO, statistics indicate that “one worker dies every 15
seconds worldwide, 6000 workers die every day and more than two million workers
die annually as a result of work related accidents and diseases.
In Nigeria, there is a dearth of accurate
information involving fatalities arising from work injuries. One responsible
cause is the underreporting of cases by private businesses and government
agencies.  However, according to Ezenwa A.O, between 1987 and 1996, the annual case
fatality rate ranged from 0.94 per 100 injured workers in 1990 to 5.41 in 1994,
with an overall fatality rate of 2.23 per 100 injured workers.
Of the 71 deaths, 12 (16.9%) were associated with
power-driven machinery. Ten (14.1%) deaths were associated with explosions,
while people falling accounted for nine (12.6%) of the deaths. Eleven deaths
(15.4%) occurred in the chemical/pharmaceuticals industry, nine (12.6%)
occurred in the basic metal industry and seven (9.8%) occurred in the food,
beverage and tobacco industry. There were seven (9.8%) deaths in the textile
manufacturing industry. The highest case fatality rate per injured worker
(16.6%) occurred in the coal-petroleum industry, followed by 5.9% in the wood
and wood products industry. A rate of 5.8% occurred in the non-metallic
manufacturing industry.
However, more recent studies by Nnedinma
Umeokafor, over an 11-year period (2002-2012), found that of the reported
accidents: 80% occurred at night; manufacturers of rubber products accounted
for the highest number of injuries at 53.8% and 63% for death; the total case
fatality rate was 49.5, hence a significant increase in case fatality rate compared
with the last study in 2001 by Ezenwa. Fire resulted in 53% of the deaths,
while management factors accounted for 91.3% of the remote or contributory accident
causal factors in which 90% were due to lack of training.
When death occurs in the workplace, the law
provides that compensation should be paid to the family or dependents of the
deceased worker.  This can be seen in Section
17(1) of the Employees Compensation Act, 2010. The act states that, “where
death occurs from the injury of an employee, compensation shall be paid to the
dependants of the deceased”. Section 17 also further stipulates the percentage
of the deceased’s salary which shall be paid to the dependants monthly,
depending on the existence of a widow/widower and the number of children left
behind by the deceased employee.
In such situations, the family members or
dependants of the deceased employee may approach the employee’s employer for
the purpose of ascertaining and collecting any compensation due to them. However,
if the employer refuses to pay the said compensation, the dependants can file a
suit at the appropriate court for adjudication over the matter.
Though the rate of work – related deaths are on a
rise, the criminal prosecutions of employers who fail to adhere to regular safety
standards and to the Occupational Safety and Health (OSH) frameworks will also
help prevent future workplace tragedies.
Adedunmade is the
Principal Partner of Adedunmade Onibokun & Co., a corporate commercial law
firm located in Lagos, Nigeria. He also publishes the Legalnaija blog, an
online platform dedicated to educating Nigerian on their legal rights and
obligations. He can be reached via dunmadeo@yahoo.com